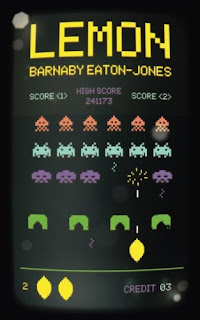 Susan Omand resists the urge to slice it into her vodka and reads Lemon by Barnaby Eaton-Jones...

[Update - I first read and reviewed this book nearly three years ago so was overjoyed when I heard that Barnaby had re-released it with a spiffy new cover from Robert Hammond (above). This is my original review but I stand by every word. Eric is a God.]

I need to start with a disclaimer. Barnaby Eaton-Jones, in case you haven’t noticed, is one of the regular contributors to The DreamCage. As, again in case you haven’t noticed, am I. Therefore we kinda know each other through that connection. But I never knew he had written a novel until it landed on my desk and, as such, it’s been read and reviewed in the same way as all the other review copies I get – that is to say, fairly and honestly and the opinions are what I thought after a first read.

Spencer Tracy (no, not that one) appears to be in the wrong place at the wrong time, as he is bundled into the back of a large black vehicle outside his house, much to the amusement of his cat, Eric, and much to the deliberate disregard of the doyen of the local neighbourhood watch, Mr Plinth. It also appears Spencer has been mistaken for somebody really important, a Mr Philip Dicks, as he is dragged into a large government bunker, in front of a bank of computer screens at which sits Lemon, a far-too-beautiful woman, who apologises for the error that has been made... and then shoots him.

Spencer wakes up the next day in his own bed, uninjured and unsure if he had dreamed the kidnapping or if it really happened. Then the mysterious parcel arrives... addressed to Philip Dicks but at Spencer’s address. Not knowing what to do with it, he takes it round to the house of his sometime girlfriend Jody, who happens to be a high flier at the MoD, and that’s when the problems really start. With Big Men (and Bigger Men) after them both, aided and abetted by arson, murder and doppelgangers, Spencer and Jody battle to find out who Lemon is, why they have become involved and what the hell is actually going on anyway.

So... imagine the Pelican Brief, written by Douglas Adams and starring a 1990’s Hugh Grant at his bumbling best. But with robots. And a cat called Eric. That’s what Lemon is all about - Government conspiracies, mistaken identities, cold-blooded murder and a sense of intrigue that hangs in the air in much the same way that bricks don’t. Yes, if you love the humour of the Hitchhikers Guide to the Galaxy, which I do, you will love Lemon. Although the stories are almost completely different, you really notice the Douglas Adams influence in the conversational way Lemon is written and can identify with Spencer in a very similar way to also-out-of-his-depth Arthur Dent. In fact, all the characters, even in the minor roles, are all really well rounded and easy to get attached to. This is especially true of Eric the cat, who, in the edition I read, gets his own short story at the end as an added bonus, and deserves even more. If you don’t like the humour though, and I realise the style is very much “love it or hate it,” this book will get very wearing very quickly as there is no let up. The story is not overly complex and, apart from one (I’m loathe to use the term but can’t resist the pun) Lemon twist I didn’t see coming, it’s fairly obvious to predict the outcome. However, this makes it a fantastic light read when you’re after a bit of entertaining adventure rather than a concentrated read with indepth characters and intricate plotlines.

So there you have it. Barnaby Eaton-Jones is the new Douglas Adams, Eric the cat is my new hero and, when literary life gives you Lemon like this, you don’t need to make lemonade, you just need to read it and enjoy.

Lemon is available direct from the author here.