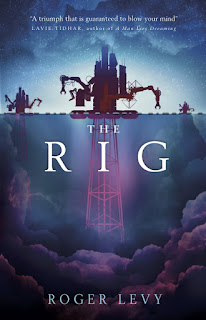 Titan Books announce the publication next month of the new SF novel by Roger Levy, The Rig...

"Welcome to the System. Here the concept of god has been abandoned, and a new faith pervades: AfterLife."

AfterLife is a social media lottery that allows a random selection of people to be put in suspended animation in the seas of the planet of Bleak at the point of death. Their Lives have been recorded by neurids – organic chips planted into their brains at birth – and now billions of subscribers will watch this unfold, voting on whether their Life deserves a second chance. Everyone can judge or be judged, and be offered resurrection or death. In the age of social media who needs god’s judgement when everyone is watching?

A delicate balancing act of humanity and technology; so many Lives, irrevocably interlinked, and one structure at the centre of it all: THE RIG. Now three seemingly unconnected strangers with access to each other’s Lives will discover that secrets they share have far reaching consequences.


THE RIG is Roger Levy’s first novel in a decade, being hailed as a triumphant return of one of contemporary science fiction’s most exciting and inventive writers. A dark and compelling vision of the future, THE RIG reads like Philip K. Dick writing for the reality television generation, perfectly realised by Levy’s innovative flair with language and imagination.

ROGER LEVY is a British science fiction writer. He is the author of Reckless Sleep, Dark Heavens and Icarus, published by Gollancz. He works as a dentist when not writing fiction, and was described as the ‘heir to Philip K. Dick’ by Strange Horizons.

The Rig is published by Titan Books on 8th May