Film - The First of the Few 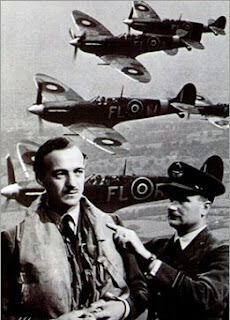 Tony Cross continues his series of articles on films and books portraying Britain in the Second World War and takes to the air with The First of the Few (1942)...

British films of the war years are, to some degree or another, all propaganda films, some more obviously that others. The First of the Few is the story of R.J. Mitchell, designer of the Spitfire. But, of course, it is also about us, the British, versus them The Germans.

The Spitfire is possibly the most written about aircraft in the world. It is a flying symbol of one of the high moments of British history. That time in 1940 when, with France, the Netherlands, Belgium, Norway, Czechoslovakia and half of Poland in German hands we stood alone. Not alone in the sense that we sometimes think. We were still supported by our Empire, but geographically we were isolated. Our army, despite the miracle of Dunkirk, was under-equipped. Perhaps the sensible thing would have been to negotiate a surrender with the Germans. Hitler claimed he had no interest in seizing control of the British Empire.

Yet we decided to fight. And we stopped the Germans. Not conclusively. But for the first time since the war had started the Germans had suffered a defeat. It was, after Dunkirk, another miracle. And since our history since then has been a managed – badly or well – decline since that point - if handing back independence to countries we had seized control of can be called a decline. In some ways, perhaps morally, it’s an improvement – the Spitfire is a symbol of a great, lost time. You only need to watch Dunkirk (2017) to see that in the scene at the end, as the Spitfire glides into land, and Zimmerman’s soundtrack echoes Elgar’s variations could have come from this film.

Yet there’s an argument to be had, put solidly by Leo McKinstry, that it was the Hurricane, a much less well-loved plane, that won the Battle of Britain. It was a more stable and powerful gun platform and shot down more German planes that the Spitfire did, but the way it was built meant it couldn’t really be improved and, as the war went on, German aircraft managed to consistently out-perform the Hurricane. The Spitfire on the other hand was tweaked and developed throughout the war vying with the ME-109 to be the great fighter plane of World War Two. The Spitfire was a work of art, the Hurricane was something more ordinary. Add the fate of R.J. Mitchell himself to the equation and you can see why they thought it was worth making a film about the creation of the Spitfire.

The First of the Few starts on September 14th, 1940 as a Spitfire Squadron returns from taking on German raiders. Apparently, they’re all played by actual RAF personnel.* And you can tell. There’s a sort of keenness to the performances that remind me of the real Arsenal players in ‘The Arsenal Stadium Mystery’ (1939). It’s amazing how easy acting seems until you actual try it. Into this scene strolls David Niven, playing Crisp who proceeds to start the telling of the story of the Spitfire’s creation via a long, long backthing

R.J. Mitchell is played by Leslie Howard (who also directs and produces). Howard was to die in 1943 when the plane he was flying on from Spain was shot down by the Luftwaffe. Howard, who was born Leslie Howard Steiner and had a Jewish father and a Jewish grandfather on his mother’s side, was keen to help the war effort and there are conspiracy theories that he was killed deliberately by the Germans (although this doesn’t seem to stand-up to analysis.) He had, by this point, already made ‘Pimpernel Smith’ (1941), which was an obvious anti-Nazi film. Howard’s performance is the centre of the film. He gets to do most of the serious work, whilst Niven** does a lot of the light comedy.

Rosamund John plays Diana Mitchell, R.J.’s long-suffering wife. The film really tells the story of a man wrapped up in his work to the expense of family and – eventually – health. What this does is try and make this heroic rather than tragic. Mitchell, the film tells us, worked himself to death but in doing so saved us all. How true this is to the real story I don’t know. It seems heart-breaking whichever way you cut it.

This film also does something that a lot of British films of the 40s and 50s do. They show us people suppressing their emotions so hard it is more painful to watch than actual emotions. As this film comes to an end Crisp comes to visit the sick Mitchell in his garden with Diana. There’s so much unsaid or lightly-touched upon that it is genuinely heart-breaking, particularly Crisp’s farewell. I must admit to crying easily, but the ‘stiff-upper lip’ sets me off every time. There’s something worse about watching someone fighting off their breakdown into tears sometimes than watching the floodgates open.

Anyway, we see the Spitfire emerge from Mitchell’s revolutionary design for Supermarine’s sea-planes that entered the Schneider Trophy. Indeed, a good chunk of the film is watching these competitions. Perhaps too much. But it gives the film-makers a chance to mock the Italians, which includes getting Fillipo Del Guidice*** to play a bombastic Italian. Later Crisp and the Mitchell’s get to visit Germany where the German’s reveal their dislike of the Versailles Treaty and their intention to build more guns, tanks and planes. It’s done quite lightly (up to a point) but when they leave the dinner Crisp says, angrily, ‘They’re going to start it up all over again.’ This scene also shows us Willy Messerschmitt meeting Mitchell. I’m not sure whether they met in real life, but it serves to personalise what follows. The Germans are planning to be brutes. This visit to Germany gives incentive to Mitchell and lo, the Spitfire is born.

But the work on the Spitfire is killing Mitchell. And he dies before he gets a chance to see it in battle, although we get that chance at the end, which is surprisingly moving if a little twee. As a film, it’s almost two hours long, which is too long. A modern re-make would cut it down, although it would certainly put more emphasis of Mitchell’s private life.

It’s not one of my favourite films of World War Two but it is an interesting illustration of how to tell the story of a man and make it propaganda. It’s also worth watching because David Niven is worth watching in anything. I suspect though it is his presence in this film and ‘A Matter of Life & Death’ (1946) that helps make people think RAF pilots were posh, which isn’t the case****. And, if you’re like me, the sound of that Merlin engine will make the hairs on the back of your neck stand-up.

**Hugh Grant at his height was often compared to Cary Grant but I think David Niven is a better comparison. Both were masters of light-comedy, but both had better acting chops than their critics gave them credit for. A re-make of ‘Separate Tables’ (1958) with Grant playing the Niven role wouldn’t be a bad idea but better would be finding Hugh Grant an ‘A Matter of Life & Death’ (1946) of his own.

***Del Guidice formed Two Cities Films with his fellow Italian Mario Zampa after he fled Italy in 1933. Two Cities films went on to make a number of well-known films that you’d think were absolutely English, including Olivier’s Henry V (1944) and Hamlet (1948), Coward’s Blithe Spirit (1945) and This Happy Breed (1944) and two war films which I may go on to talk about later, ‘The Way Ahead’ (1944) and ‘The Way To The Stars’ (1945). Funny Britishness innit.

**** Interestingly Niven himself ended the war as a Lieutenant Colonel, although what he did during World War Two is a matter of some discussion.