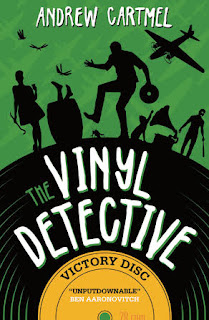 The Vinyl Detective gets back on track as Titan Books announce the publication next month of the latest novel in the series by Andrew Cartmel, Victory Disc...

South London’s finest returns in a brand-new adventure that will delight music and crime lovers alike. In books one and two (read Tony Cross' reviews of those here and here) the LP-loving hero was in the safe (well, relatively speaking) company of his beloved vinyls, but now the discovery a rare Second World War Victory Disc propels him into the unknown world of shellac – a brittle resin commonly used for the earliest of records.

He’s faced up to murderous doctors, deadly assassins and determined guard geese, but has the Vinyl Detective finally met his match as he sets out to ensure the safe keeping of some of the world’s most delicate discs?

When one of his cats accidentally discovers a rare Victory Disc, the Vinyl Detective and his girlfriend Nevada are whisked into the world of big band swing music, and a mystery that began during the Second World War.

Hired to track down the rest of the highly sought-after recordings of the Flare Path Orchestra, our hero will discover that the battles of the last world war aren’t over yet. And if all this sounds simple, it’s only because we haven’t mentioned drive-by shootings, murderous neo-Nazis, or that slight case of being buried alive…

The Vinyl Detective series is a pitch-perfect homage to the joys of record collecting. Fast, funny and fuelled by music, each book in the series sees the quirky heroes tackle wholly new adventures to an ever-changing soundtrack for each adventure. If you haven’t discovered London’s most original private detective now is the time to join him.

Andrew Cartmel is a novelist and screenwriter. His work for television includes Midsomer Murders and Torchwood, and a legendary stint as Script Editor on Doctor Who. He has also written plays for the London Fringe, toured as a stand-up comedian, and is currently co-writing with Ben Aaronovitch a series of comics based on the bestselling Rivers of London books. He lives in London.

The Vinyl Detective: Victory Disc is published by Titan Books on 8th May