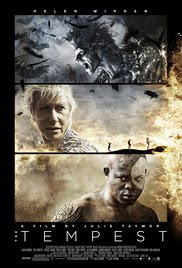 Since it's Shakespeare's birthday, a reminder of Ren Zelen's thoughts from a couple of years ago on what happens when you cast Helen Mirren as the Duke of Milan in Julie Taymor's adaptation of The Tempest (2010)...

Rarely does one see an adaptation of a Shakespeare play in which the gender of the leading role is reversed; Director Julie Taymor, however, decided to change the gender of Prospero in Shakespeare’s ‘The Tempest’ in her 2010 adaptation. In a provocative act of revision, the formidable Helen Mirren presides over the proceedings and assembled characters, playing the former ‘duchess’ of Milan.

What makes Julie Taymor’s adaptation of ‘The Tempest’ so audacious (unforgivably so, judging by some reactions) is that it serves to open up Shakespeare’s play to reveal themes that the original text might otherwise not have accommodated.

In Shakespeare's original play, Prospero was the Duke of Milan. Here Prospera is the wife of the Duke. In this version, her husband gives his Dukedom to Prospera instead of to her brother, the presumed successor, with the suggestion that this is because he believed that she was wiser, better educated and would rule in a more principled and compassionate manner. In an overtly patriarchal society, this provides a further reason as to why Antonio (Chris Cooper) might be humiliated and embittered about being overlooked.

Taymor maintains that Prospera is "more overtly wronged" because when the duke dies, her brother Antonio makes the accusation that Prospera has murdered her husband by witchcraft, so that he might besmirch her name, be rid of her and claim the royal title. Her interest in the magical arts and her gender both lend credence to Antonio’s accusation and so Prospera is robbed of her Dukedom by her brother. The bitterness with which Mirren delivers the line, “knowing that others of my sex have burned for far less” has particular resonance. Taymor has said, "She had her whole life taken away from her because she was a woman… Prospera wants to prevent the same thing from happening to her daughter”.

Interestingly, in Taymor’s movie it is stressed that Prospera’s books and scholarship are the sources of her power. It is implied that the people in Milan may have feared such an educated and capable woman, and were all the more ready to believe Antonio’s accusations. If they could not contain her power and insight they preferred to be rid of her, underlining society’s ongoing reservations about accepting and celebrating clever, dynamic women. 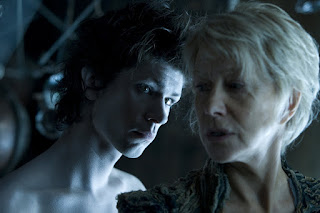 Able to exercise her power over the island where she is exiled, Prospera has enslaved both Ariel (played by an ethereal Ben Whishaw) and Caliban (played by a distinctly earthy Djimon Hounsou). Ariel she obliges to do her bidding after having rescued him (but with the promise of future freedom). She has subjugated Caliban as a punishment after his attempted rape of Miranda. Caliban’s violent actions against Miranda are alluded to, and here, having a mother in this situation rather than a father, creates a certain empathy regarding the abuse of her daughter, and an understanding as to why Prospera may hold an angry grudge against Caliban and take satisfaction in subjugating him on his own island.

When Prospero is a woman, a central relationship in the play between the primary character and her child Miranda (Felicity Jones), sheds some of its traditional, patriarchal dynamic. Instead, this mother-daughter bond resonates with trepidation, protectiveness and identification, and has the opportunity to blossom into something newly fruitful.

‘The Tempest’ begins when a shipwreck casts members of a royal court ashore on the island that Prospera controls. Their fateful arrival is no accident, as it was engineered by Prospera whom these men banished and who now plans to take vengeance on them.

When love casts its own spell on her daughter Miranda and Prince Ferdinand, the king Alonso’s son, Prospera finds herself powerless to intervene. Because Prospera is now Miranda’s mother, the parent-child relationship takes on a different aspect. Instead of a father using his daughter to regain his power, we have a mother who looks protectively, wistfully, but kindly on her daughter as she watches her girl fall in love with the shipwrecked Prince.

Helen Mirren plays Prospera as regal, determined, yet still vulnerable. She outlines the character’s calculating vengeance, but also her dignity, loneliness and need for her daughter’s affection. Jones’s Miranda is presented as both the sweet, inexperienced and unworldly ingénue, but also perhaps a younger version of her ardent, intelligent mother.

Prospera eventually relinquishes her magical powers and does so without tears, although she breathes a heavy sigh of resignation as, resuming her previous garb as wife of the Duke to meet her former enemies, Ariel helps to tightly lace her corset—the physically confining and deforming embodiment of European female subservience.

Presentation and costume may sometimes give clues to understanding some of Taymor’s interpretation. Caliban, whose appearance contrasts with the semi-translucent Ariel and the black, tightly buttoned, conquistador-like garb of Alonso’s men, takes its cue from the derogatory language with which he is described in Shakespeare’s original. He is monstrous because he is a mélange of diverse elements (“fish” with webbed fingers and scales; “of the earth,” covered in mud, naked; a “mooncalf,” with a circular patch of vitiligo on his face) and is meant to imply something primal, exotic and unpredictable. 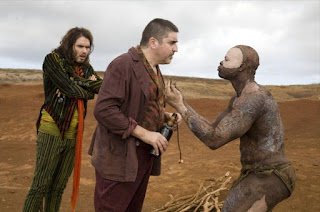 The sight of European sailors encountering the indigenous being and failing to recognize his humanity is made more telling by the bemusement of the buffoon Trinculo (Russell Brand - who comes on dressed like Dr Who and slightly overplays his hand) and the drunken, dissipated Stephano (Alfred Molina). Hounsou plays Caliban with roaring bluster, indignant at his servitude, lustful for Miranda and just cunning enough to string along the sailors in order to serve some of his own vengeful purposes.

The actors generally acquit themselves honourably; As Gonzalo, Tom Conti speaks his part with a discursive directness. Felicity Jones utters Miranda’s love poetry with feeling, which unfortunately only emphasizes the weak link that is Reeve Carney, the pretty-boy mumbler cast as Ferdinand, the object of Miranda’s devotion.

The CGI in the movie comes across as rather ‘seventies-psychedelic’ when used to demonstrate Prospera’s mastery of magic, but works impressively well when creating the visualization of the sexually ambiguous Ariel, who darts around his master, never fully incarnate, and takes on various forms, including a dark, sinister, raven-like, avenging angel.

Minimizing the motif of magic as a metaphor for the illusion of the theatre, Taymor’s Tempest foregrounds issues of power. The switch from Prospero to Prospera, creates small textual alterations: pronouns are changed, although the address of “Master” (which connotes a more proper relationship of power than “Mistress”) is retained. Changing the gender of the protagonist can be a shot in the arm to a classic, but a great idea alone doesn’t make a great film. In her version of ‘The Tempest’ Taymor distils the play, but she does this cannily, without digressing from the glorious poetry into too many stage or screen flourishes. The gender switch of Prospero to Prospera does the play no harm, and opens up some intriguing readings.

‘The Tempest’ is believed to be the final play that Shakespeare wrote on his own, and is often read as an allegory of the theatre, with Prospero being Shakespeare himself. It is also the portrait of an artist performing a final work of creativity before being ready to relinquish the magic and set down his…or her… tools.