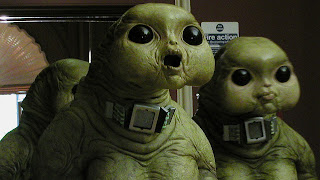 Our Doctor Who expert, Tony Cross, is journeying through all of time and space to bring us his thoughts on every available Doctor story. Today is the Ninth Doctor adventures Aliens of London and World War Three...

The first multi-episode story of 'New' Doctor Who with a cracking multi-jeopardy cliff-hanger this is an OK little story. It's certainly not as bad as some people seemed to feel at the time when there was much whining about fart jokes.

Yes, the fart jokes are spectacularly childish but then what's the point in being grown up if you can't be childish sometimes and - if my memory is correct - no one appreciates a fart joke better than a 8 to 10 year old kid so job done.

More irritating is the layered on with a trowel, half-arsed political satire clearly meant to be a dig at Tony Blair and the Iraq War. It's so unsubtle most of the time that it just seems like gratuitous. The best and sharpest dig is the almost throwaway line given to Rose herself in the Cabinet Room: "Why not, it worked last time." And we're meant to know Harriet Jones is a good 'un because she voted against 'that'.

Credit to RTD though for showing the implications of travelling with the Doctor on family and friends. It's one of those scenarios that you're surprised no Doctor Who writer has taken on before. Companions often seem to have been waiting for the Doctor to turn up and then return to a normal life as if nothing ever happened. It's not something you want to think about too much because it is one of those threads of reality that can unravel your suspension of disbelief: all those empty flats and missing person enquiries are a bit too 'real' for my liking but it is interesting and it helps differentiate the RTD version of Doctor Who from the Classic era.

It helps that Billie Piper does a fine job on Rose. I said before that when she was announced as the new companion I had serious doubts, but I was sold on her quickly. It's interesting though that perhaps the character in Series One who is on the most interesting trajectory is Mickey Smith (Noel Clarke). In 'Rose' the Doctor is rather rude to him (in a rather un-Doctor-ish way actually) and the same vibe is evident in this story, at least initially. The implication is that his 'stupidity' has been holding Rose back in some way and that the Doctor's arrival releases her from a life of tedium, but it is also possible to argue that perhaps Rose is holding Mickey back and it is the Doctor's arrival that broadens his horizons and changes his life as much - if not more so - than Rose. He might not be travelling in the TARDIS (and the scene at the end when the Doctor and Mickey have their little conspiratorial chat is played rather nicely in this respect) but he's a different (and better) person because of the Doctor's involvement. Even if Rose's disappearance made him a murder suspect. 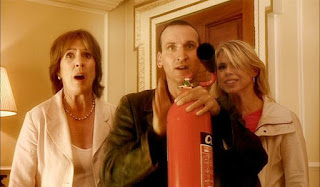 Jackie Tyler's reactions all seem real to me to from the slap through to her 'I could stop you' conversation with Mickey and the final discussion with Rose, the Doctor and Mickey. I like Camille Codouri's performance. She reminds me of a couple of people I have worked with over the years, which makes her as real as any Doctor Who character I've ever seen.

And that's the thing about RTD's Doctor Who. It's still recognisable as the same series that ran from 1963 to 1989 but he's picked up lessons from watching lots of different types of television, particularly soaps to help anchor the series more in the real world. It might be a shame not to be planet hopping on a weekly basis, but the regular characters, the 'realistic' housing estates and people help cement the Doctor into place.

Having said all that RTD rather spoils that effect by making the Slitheen so cheesily bad guyesque. All they're missing are moustaches they can twirl for real ham effect. The performances aren't bad (and Rupert Vansittart's General Asquith hardly changes a jot upon becoming Slitheen) but they're just lacking a bit of subtly. An accusation that can be levelled at Penelope Wilton's Harriet Jones (although there are moments when she's allowed to calm down and breath at which point you start to like Harriet). Whilst in the end everyone stays the right side of ham this story does teeter on the brink of becoming dangerously like one of those old Doctor Who stories where people start playing it silly because there's jokes in the script and it is 'just' Doctor Who. Farting monsters does not encourage acting subtly. Perhaps I'm being a little harsh.

Eccleston's certainly not too affected by it. He's brilliant in this. Possibly as good as he's been at any point in the series. His anger at the shooting of the pig, the 'narrows it down' scene, the last chat with Micky, his reaction to Jackie asking if her daughter was 'safe' and his confrontation with Anette Badland's Margaret Blaine Slitheen: all great moments. He's got layers this Doctor and Eccleston's good at digging into deeper ones when required.

So in truth not the best Doctor Who story ever made by a long chalk but not the worst. The first episode is more interesting than the second, which is mainly a dash around but certainly not dull.