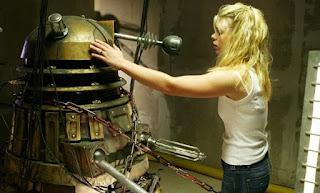 Our Doctor Who expert, Tony Cross, is journeying through all of time and space to bring us his thoughts on every available Doctor story. Today is the Ninth Doctor adventure Dalek...

'Dalek' is the tale of two survivors: a lone, soldier Dalek and The Doctor, Last of the Time Lords [Portentous Voice]. Everything else is mere frippery.

It packs a surprising emotional punch as we see The Doctor genuinely frightened and angry. At points he appears to be virtually unhinged. Driven to Dalek methods at the end of their first confrontation we realise that the Daleks bring out the worst in the Doctor, as well as the best.

I read or heard that Nicholas Briggs, who provides the voice of this rather devious Dalek, said that Christopher Eccleston said to him that their first confrontation was like a Holocaust survivor meeting a SS Officer. That might be a rather heavy comparison but there is a heft to these scenes that their context probably doesn't deserve. The last two survivors of the Time War brought together in a bunker in Utah to fight one last fight.

As usual in Doctor v Dalek confrontations a lot of people get diced in the crossfire and there's a human being who thinks he's the one in control, Henry van Statten (Corey Johnson). Unfortunately, his rather petty human concerns are just that. Petty.

'Dalek' does however illustrate the emotional 'punch' that is now a standard part of the RTD Doctor Who format. Every story seems to have - at least one moment - of solid emotional power. Often a quiet moment of contemplation but in the case of 'Dalek' bought out in confrontation.

The Daleks are at their best when devious and this Dalek is a classic of the kind. The first return to the new series of the Daleks and we are reminded of how clever they are, as well as dangerous. These aren't stupid robots. These are geniuses with a penchant for killing. Einstein in a tank. They can crack codes in seconds and manipulate humans - in this case Rose - into feeling sympathy for them. But then why should Rose not feel sympathetic to this poor, battered creature who is chained up and tortured in some Utah dungeon. She's never heard of a Dalek.

The Doctor never feels more alien than here. His knowledge of the Daleks and what they are capable of puts a wall up between him and everyone else, particularly Rose. He tries to 'exterminate' the Dalek. He's told by the Dalek that 'we are the same' and that he would have made a good Dalek (possibly the most chilling line in the whole programme). And it is Rose asks 'And what about you Doctor? What have you become?' as he waves a big gun about and threatens to destroy the Dalek.

All that anger. But there's also the killer moment when the Doctor realises - as Rose doesn't - what the 'contamination' means for this last Dalek. There's a surprising amount of sympathy. Eccleston is amazing in this episode reaching out for emotional truth in every scene. Whatever one ends up thinking about Eccleston's Doctor there's never a moment when he isn't treating the material with respect. 'Dalek' is probably the best story so far in 'New' Doctor Who and Robert Shearman's writing brings out the best in everyone concerned. There's also a couple of scenes - including right at the beginning as the Doctor contemplates the detached head of an Invasion era Cyberman - where the weight of his age and survival seems to weigh him down so much. Emotional depth wasn't something 'Classic' Who was known for. RTD's 'New' Doctor Who brings more emotion full stop and some of it is quite moving. Not all of it. Sometimes it does feel like a soap opera. But sometimes, like in 'Dalek', it works.

Billie Piper too excels. Her genuinely naive sympathy for the Dalek is lovely as is her admonishing of the Doctor in the final scene. She even does some nice flirting with Adam (Bruno Langley). Adam's as wet as a paper bag so I'm surprised when the Doctor agrees to take him off too with them at Rose's request but into the TARDIS he hops. But I digress from praising Billie Piper. She's doing a fantastic job so far.

'Dalek' ends with us feeling sympathy towards the Dalek and contemplating the Doctor's possibilities. There's a new person aboard the TARDIS - even if he is a bit wet - so it'll be interesting to see how that pans out. The strongest story of the season so far. Recommended.