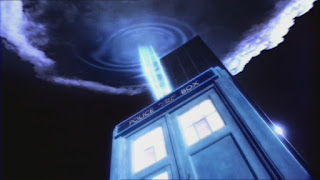 Our Doctor Who expert, Tony Cross, is journeying through all of time and space to bring us his thoughts on every available Doctor story. Today is the Ninth Doctor adventure Boom Town...

Boom Town is an almost light-hearted piece of Doctor Who fluff featuring the return of Slitheen in disguise Margaret Blaine (Annette Badland).

It doesn't really have much of a proper plot and what is there makes no sense. Even allowing for the parochial natural of Welsh politics via Westminster would any regional Mayor be able to build a whacking great nuclear power station in the middle of Cardiff in the process of which dozens of officials die in bizarre and mysterious circumstances? No, of course not. But it doesn't matter. This story isn't about the silly plot. It's about getting RTD's ducks in a row so that we can get down to the delights of the season finale.

So we get Bad Wolf emphasised, then shrugged off; we get Mickey to remind us of Rose's home and past; we get a glimpse into the 'heart of the TARDIS' and awestruck talk of its mysterious powers and we get some light-hearted borderline smug banter that seems purely designed to isolate poor Mickey.

Like one of those dull fruit based starters you used to get in restaurants it looks nice but hardly seems worth the effort.

It's not that I don't like Boom Town, I just can't get too bothered about it.

It's not without good moments: Annette Badland is excellent throughout, especially when having her last wish dinner with the Doctor. Cunningly trying all her weapons to escape the Doctor's grasp. Some of her digs, about the Doctor not wanting to look back at what he's done seem to strike home (and are to be repeated much, much later by other nastier villains). Indeed, it isn't often that we see the Doctor confronted with cogent arguments about his lifestyle. The scene where Margaret exercises her mercy, influenced by...something is also rather nice.

Unfortunately the 'egg reversion' at the end provides the Doctor with a nice escape from the moral dilemmas that Margaret had placed him in. In the end all that talk was just talk.

Throughout these scenes and others Eccleston is faultlessly brilliant. He's got the switch of emotions in a flick of the eyes down pat now. The classic example being the 'Bad Wolf' speech: he's noticed, builds it up & then throws it away. In moments. It's rather lovely.

Mickey's realisation, as he turns to find Rose rushing off towards the chaos to find the Doctor, is also nicely played: "It's always the Doctor." Also, rather good is Rose's, "He deserves better." Poor old John Barrowman - words you won't see often in these articles - gets shunted off into the TARDIS for most of the story, getting to do some pretty work with lights.

But I'm dragging out what should be a short review of a nice but easily forgotten story.