Doctor Who - The Empty Child & The Doctor Dances 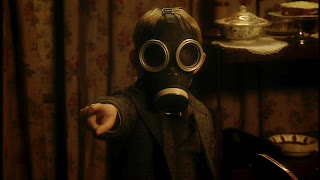 Our Doctor Who expert, Tony Cross, is journeying through all of time and space to bring us his thoughts on every available Doctor story. Today is the Ninth Doctor adventures The Empty Child and The Doctor Dances...

Retrospectively these two episodes carry a Doctor Who weight that didn't seem to be there at the time. Here's Captain Jack (John Barrowman - as if you need telling) with his 51st century sexuality and here's Steven Moffat with his low casualty, mother knows best obsession bringing the spooky back to Doctor Who.

None of that mattered much then. What did matter was that this was two excellent episodes of New Doctor Who. Comparable in hiding behind the sofa creepiness with the original series for the first time (at least to me). You could imagine this as a Classic series story, almost. There'd be no use of dance as a metaphor for sex though. O no. No hanky panky in the TARDIS back in ye olden days. Here we get flirting and omnisexual 51st century time agents who might just fancy both anyone (and anything).

Some people seemed to go frothing at the mouth about Captain Jack with raging talk about 'the gay agenda'. Personally, I think it is the 21st century and anyone who thinks that Doctor Who can be made here and now whilst ignoring the existence of gay people is a bit out of touch. Besides which just because John Barrowman is gay doesn't mean Captain Jack is. He's from the 51st century heterosexual and homosexual are just meaningless labels by that point. After all - the implication is - mankind is out there amongst the stars shagging everything that moves (which echoes a dig made by Cassandra all the way back in 'The End of the World' about purity).

This is almost the first story in the New Doctor Who where the jeopardy feels real and an excellent cliff-hanger adds to that. It's nice to end on a cliff-hanger unsure of what awaits our heroes, even if we know that they will escape (as they always must). I like the Doctor's method of escape too as well as the disturbing scene with the tape recorder that occurs almost immediately afterwards. I think we all notice that the tape has stopped before the Doctor, Rose and Captain Jack and waiting for them to notice adds to the tension.

Who'd have thought a little child in a gas mask could have been so scary? 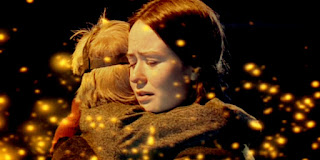 The advantage of the two episodes of course is that it gives us time to breathe. To get to know characters and their mysteries. Captain Jack's introduction would have been much less effective - in my opinion - if he'd been slapped into a single 45-minute run around. Here we get a chance to get to know him (or think we know him) before the main action begins. It's all rather lovely.

We also get to know - and wonder about - Nancy (the excellent Florance Hoath) before the long slow reveal about the truth of her relationship with the Little Boy. She is, of course, a mother, which is something of a Moffat trope (as we'll see) but speaking as someone who Nan had her first child out of wedlock in the 1940s Nancy's desire to cover it up is perfectly true to the time and the place.

I liked the scenes in the hospital as the Doctor was gradually shown, first by Doctor Constantine (the mighty Richard Wilson) and then by actual events what had happened. The Doctor's dawning realisation of what's happening is well played and sign-posted. There's also a lovely little throwaway moment when Doctor Constantine says, "I started off this war as a father and a grandfather. Now I'm neither." To which the Doctor responds, quietly, "I know the feeling" (or words to those effects). The first admission in the New Series (I think) of the Doctor's parenthood (and grandparenthood: hello Susan).

Christopher Eccleston is simply brilliant in this. He covers all the bases well: comic and straight. So, he's out of dancing practice. It'll come back to him in the end.

Billie Piper's good but I'm not sure I like her immediate fall for Captain Jack. It lessens her a tad I think. It's like 'ooh gorgeous man. Swoon'. But the dialogue is sharp and funny enough to gloss over this and later shrug it off altogether.

And what of John Barrowman as Captain Jack. He's good. He's not the world's greatest actor but he doesn't need to be in this. His timing is pretty good comedy wise (the scene between him and Christopher Eccleston over sonic stuff is funny but I like how the Doctor gets to use a Banana to win the overall argument.) He's still new here too. No baggage yet.

It's a refrain of mine that it is hard - if not impossible - to go back to old Doctor Who episodes 'fresh'. I've seen them all. I know what happens to them. It's easy as a result to see foreshadowing where there might not be any or to read too much into a single scene, especially with a character like Captain Jack. Or the Doctor himself.

And perhaps it takes both Rose and Captain Jack to do that?