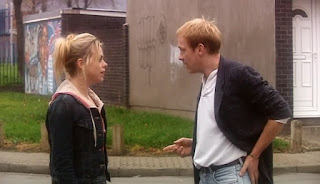 Our Doctor Who expert, Tony Cross, is journeying through all of time and space to bring us his thoughts on every available Doctor story. Today is the Ninth Doctor adventure Father’s Day...

Father's Day is a story that illustrates the perils of time travel, especially when you don't know what you're doing. More importantly though it is about the courage of the ordinary man. An ordinary man who might not amount to much, who looks like a nobody but who has the courage to do the right thing, even if that right thing is dying.

It is a twisted version of "It's A Wonderful Life".

In truth the Doctor should have known better. Not only does he take back Rose once. He does it twice and the second time around she can't help but interfere. Who couldn't or wouldn't if presented with a similar choice. Except, as the Doctor points out, it isn't as easy as that. Time travel brings a certain level of responsibility. Rose thinks he's jealous, but I think he's just disappointed and - perhaps - feeling a little used. The dangerous consequences of Rose's actions aren't the real cause of the Doctor's anger - though it is part of it. The real reason for the Doctor's fury is to do with trust.

In the end it isn't the Doctor that saves the day either. It's Rose's Dad, Pete. He realises what needs to be done. He realises that Doctor knew too but was trying to find a way to help Rose. Pete also realises that he's dead in Rose's 'real' world. When she tells him what a reliable Dad he is, he knows that isn't him. It's a lovely moment.

Paul Cornell does a great job of making you think there's an escape coming that'll bring about a lovely, happy ending and then snatching it away. Cornell also makes ordinary life seem magnificent. Not just with Pete Tyler's ordinariness or Jackie Tyler bringing up Rose on her own but in the little speech the Doctor makes to the Bride and Groom about how he's been everywhere but that he'll never have a life like they will. It's nicely played by Eccleston, who is on fine form throughout but really this story belongs to three people: Shaun Dingwell as Peter Tyler, Camille Coduri as Jackie Tyler and Billie Piper as Rose.

All three are excellent bringing real emotional punch to their roles, especially right at the end. It's unusually emotional for Doctor Who. Unusually real. The performances back that up to the extent that the Doctor Who monster elements of the story just don't feel right.

One of the reasons Doctor Who is such a brilliant series is that it can - within the family entertainment remit - do whatever kind of story it wants to. There is no such thing as 'typical' Doctor Who. Each Doctor, each companion, each season and each story can be as different as the next. This is an unusual story for Doctor Who touching on the ramifications of time travel in a way the series doesn't often do.

My problem with it, despite all the praise, is that making the Doctor quite as peripheral to the final events doesn't feel quite right. I know this is a story about ordinary people in extraordinary circumstances. The power of one person to make a difference and it seems churlish to complain but on re-watching this it didn't quite have the impact it had on me the first time I saw it. There feels like there's something missing. Something not quite right.

I'll be honest and say that I'm not sure what that missing thing is. It's certainly not the performances, which as I've said are superb. It's something else. One day I might be able to put my quibbling in to words. In the meantime, I should say that this was as enjoyable as hell and moving too so perhaps my doubts are unimportant.