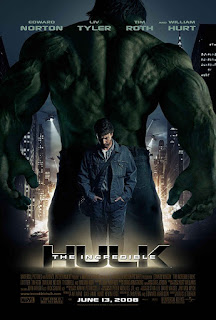 Kraig Taylor-Bryant continues his look at some of the solo films of the characters from the upcoming Avengers Infinity War. This time it's The Incredible Hulk...

The Incredible Hulk was released around 2008, meaning I was probably around the age when I watched it with a few vague memories of both interest and fear for this character. But of course, that’s the greatest part about the Hulk, the fact that you can love him and hate him at the same time. He can be the out of control Hulk that destroys everything, or the restrained, calmer Hulk, that only smashes when he needs to in order to protect someone or something, and that’s why I think that this character could definitely be one of the most interesting characters in Avengers Infinity War, especially with the Mind Stone in play.

The film does an incredible job of making both military and science look like threats to humanity, making you think deeply about whether curiosity in science can be incredibly dangerous if a scientist lacks caution or clarity of mind when facing either an opportunity for curing diseases or one for disaster should it go wrong. The first sign of this, of course, is Bruce Banner himself and the fact that (as we learn later on) he actually created the Hulk through the experiments he conducted by himself, without stopping to wonder what kind of tests it was that the military wanted him to conduct, and the military that wanted this not stopping to wonder if such a thing could really be used in war to save lives, or if it would cause more harm than good. Bruce of course, ends up paying the price for his lack of caution when taking these tests and, as a result, he ends up putting his lover in danger, leading the General in charge of this project, (and the father of his lover) to hunt him down and use him to create more controlled versions of himself, to help them win wars.

The General here is a very interesting character, he’s old enough to have seen war or battles of some type in his life and clearly he’s seen enough of it to want to make sure that he doesn’t have to witness much more death again in his life. But this film treads on the fine line between wanting to save lives by hunting a half human radioactive monster or allowing more to suffer in war. It’s this fear that blinds the General to realising the destruction such a creature could cause, if someone else were given the same kind of radiation. And it’s interesting how it takes him so long to realise that this project cannot be conducted on any more people after seeing what it does to one of his best soldiers, who was once dedicated to protecting people but, in the final climax of the film, was killing any people in his way. This film has a great way of making you hate this character, but at the same time, you keep seeing it from his perspective. That moment in the opening credits when the General sees his daughter lying in a hospital bed because of this creature, even if this being does protect his daughter from his own gunfire, it doesn’t mean he can’t still be a threat if aggravated, and the General probably learnt such a thing whilst in warfare through experience with spies and such. So in a way we learn what kind of damage fighting can do to a man, and how they can lack that humanity that would make a normal person think about what they are doing, especially after his orders almost cause him to get his own daughter killed. 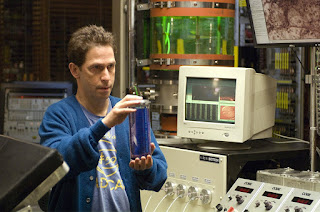 We also have “Mr Blue”, a mysterious character for the first part of the film who goes by this alias to make it harder for the government to find him. Mr Blue aka Samuel Sterns seems to want to help him find a cure, but really he wants to use the blood of the cells inside Bruce, to create something that can help people. So we’re sort of seeing opposites with a same reaction between the General and Mr Blue. The General want to use the cells to create an army to hurt people, which can then cause others to be protected from those that can cause harm, and Mr Blue thinks he can use it to save lives and gain fame. But ultimately both lead to the risk of death and destruction if the reaction goes wrong in any way, showing that lack of caution and rational thought can lead a person to commit unspeakable acts, perhaps even without meaning to.

Then, of course there’s Bruce, who is constantly shown to be the victim, which is alright because he’s meant to end up being a superhero when he gets approached by agent Romanov to join the Avengers. But we constantly see close up in this film, that Banner is trying desperately to not become the Hulk again by watching kids shows, watching his blood pressure, and practicing breathing exercises to calm himself down. There’s very much a cross between Romeo and Juliet and Frankenstein going on with this character. There’s a questionable romance between Bruce and his ex-girlfriend, but they can’t be together because it could lead to one of them ending up getting hurt (Bruce getting hurt if she ends up getting taken away for helping him try to outrun the military). And as for the Frankenstein element, we have a scientist who created a monster with the intention of bettering humanity from their tests/project, but ends up creating something terrifying, and potentially something that can cause harm to many. But of course, like with the monster in Frankenstein, there is kindness inside it, which we see through Bruce’s love interest Betty. Betty is portrayed to be a character that clearly has strong feelings for Bruce, but at the same time, still seems to end up being the typical damsel in distress, which is a little upsetting because we see enough of that in fantasy story books. But nevertheless, we do kind of need that in this story to kind of bring across the Bruce that still wants to keep his love interest out of harms’ way. This helps to make the story more tragic and reminiscent of Romeo and Juliet, as we learn at a stage in the film that they can’t even be physical with each other when Betty ends up going with him. 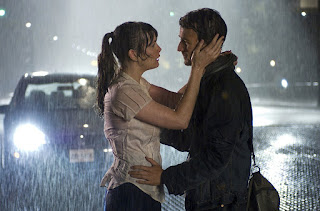 One of the other aspects of this film that really helps it shine is the music that is used throughout the start of the film. It’s very reminiscent of a hospital drama and the beat/rhythm of the soundtrack sounds very similar to a heartbeat. Which is perfect as there are many moments captured in this film where he is watching his blood pressure, clearly showing that he cares about everyone around him and doesn’t want to become the Hulk. The fact that this soundtrack escalates both in rhythm and pace during chase scenes is incredible as it hints to us that his blood pressure is increasing and adds an extra level of intensity to the chase scenes. At the start in the opening credits we also get a very Frankenstein feel to the character, as the tune seems to have a constantly dark pitch and when the high pitch is used it helps to make the atmosphere a little more creepy, and almost make you question if the Hulk is the villain of this film or the hero, early on.

It’s clear that the Hulk in this movie is different to the one shown in the future Avengers movies because the actor who plays the Hulk in this film is Edward Norton, whereas in the Avengers, they used Mark Ruffalo but of course, as they are the same character really, we can still consider both Norton’s and Ruffalo’s portrayals to be of the same version of the Hulk. Overall, I think that the deeper themes which we have time to experience in this, Edward Norton’s portrayal, help to make Hulk a deeper and more questionable character. Although when you analyse them separately, Ruffalo’s is a fairly concerned Hulk that doesn’t understand the destruction he can cause until his mind is controlled by Scarlett which, whereas Norton’s is one that understands the pain he can cause, because he’s seen the harm he caused to his lover, Betty. This is what makes Norton’s version so much more developed, because we don’t see agent Romanov get hurt by Ruffalo’s Hulk, so it takes him longer to realise the destruction he can cause and the innocence he can destroy. The fact that, in The Incredible Hulk film, Banner knows this from the very start, and we see how he deals with that, is what, I think makes Edward Norton’s Bruce Banner and Hulk, better overall, but I’m still anxiously anticipating the Hulk character’s role in Avengers Infinity War.