Doctor Who - The End of the World 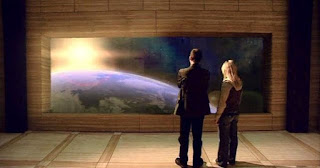 Our Doctor Who expert, Tony Cross, is journeying through all of time and space to bring us his thoughts on every available Doctor story. Today is the Ninth Doctor adventure The End of the World...

The End of the World sees the Doctor and Rose travelling five billion years into the future to watch the world get blown up. They're joined aboard Space Station One by the 'great and good' of the Universe, which as the Doctor says really means 'the rich'. Included in their number is a large flap of skin and lipstick called Cassandra. She's the last human, apparently.

This being Doctor Who, of course there's no way this is just going to be a simple exercise in watching. Something is bound to go wrong.

I enjoyed this more than 'Rose'. It didn't feel quite so rushed. In fact, it feels like it was deliberately meant to be a slower episode designed to let the characters of both the Doctor and Rose breathe a little as a result both Christopher Eccleston and Billie Piper seem to shine a little more.

I like the fact that Rose herself doesn't just take everything in without shock or questioning. Her reaction to being in a room full of alien aliens whilst watching the world about to be destroyed seems real to me: you'd freak out a bit. The questions that you'd have running through your mind. The shock of seeing all these new, strange things. Human beings find changing schools hard enough, let alone jumping five billion years into the future to drink cocktails with weird aliens.

Billie Piper does a great job at conveying the shock and the need for questions. The scene between her and Christopher Eccleston that ends with him fixing her phone is brilliantly played by both. Even the awkwardness seems right.

However if Piper is excellent for me this is Eccleston's episode. From his remarkable moves to 'Tainted Love' through the scenes with Jabe (Yasmine Bannerman) to the cold confrontation with Cassandra and into the chips moment he's stonkingly good. It's the way he can do so much with just his eyes as in the scene when Jabe points out that she knows what race he is and that she's sorry. He's doing almost nothing. In fact, the Doctor's occupied but you can see he's listening and you can see how much he's remembering and it is all done with barely a movement. Amazing stuff.

It's nice to see Doctor Who do a wide and wonderful selection of aliens too, even if almost none of them get much of a chance to be anything but moving costumes. There's a nice little blue alien plumber called Raffalo (Beccy Armory) who gets a chance to show us how nice Rose is compared with a lot of the guests on board: they talk. Unfortunately, I think she then gets bumped off. I'd like to think she isn't killed but imprisoned somewhere but based on what happens elsewhere I suspect not.

Cassandra's fate reminds me that the recent controversy over the Doctor's decision to let Solomon die isn't quite the one-off event the people seem to think. People with bad memories I assume. Rose even explicitly asks the Doctor to help. But he doesn't because he's angry. Both Rose and the viewers learn something about the Doctor then. I'm not sure Rose ever really takes it on board.

It ends with a lovely little coda and talk of chips. The Doctor explains to Rose that he is the last of the Time Lords, mentions a War that his people lost but ignores Rose's 'against who' question. It's a nice end to a nice episode.