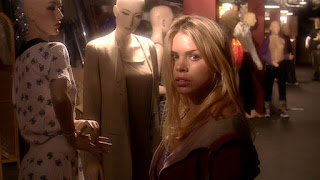 Our Doctor Who expert, Tony Cross, is journeying through all of time and space to bring us his thoughts on every available Doctor story. Today is the Ninth Doctor adventure Rose...

It seems a long time ago, in a galaxy far...sorry. It's hard to watch this again without it being affected by what's happened since and what was happening before.

I was so excited but also a little fearful of how it might turn out. When they announced Christopher Eccleston as the Doctor I thought - forgive me - FANTASTIC! A 'proper' actor with the right kind of baggage. Not a superannuated celebrity wanting to break into 'drama' but Christopher Eccleston. If he was in it then surely this time it was serious. Then they announced Billie Piper would be the companion and I thought she would be terrible. All I knew about her was she released some terrible music and was married to Chris Evans. It was swings and roundabouts.

So come 26 March 2005 I had my fingers crossed. I knew that this wouldn't be the same as Classic Doctor Who. Gone were 25-minute four-part stories, replaced by 45-minute single episodes (although there was talk of a couple of multi-part stories, but I was so out of the loop at this point as to be in an entirely different loop). So, I watched and enjoyed. But it seemed to fly by at breakneck speed: Rose-Autons-The Doctor-Rose-Micky-Autons-Nestene Consciousness-The Doctor Wins-Rose. And breathe. But director Keith Boak keeps it coherent even as it dashes along. Yes, the plot is a bog-standard Doctor Who one but that's not really the point.

Now, of course, we're used to the 45 minutes episodes so re-watching Rose it seemed a lot less rushed. In fact, having watched 'Spearhead from Space' again recently there isn't a huge amount of difference in the pace (but 'Spearhead' is unusual in that regard). It still rattles along though. There's not much in the way of action before we're at the climax.

The Doctor doesn't show up immediately. Initially we're in the company of Billie Piper's Rose Tyler as she goes about her normal day. Here I admit to being absolutely and totally wrong about Billie Piper. She's magnificent here from the off and her reaction to entering the TARDIS is one of my favourite moments in all my Doctor Who-ing. She's a normal human being. She's got a Mum (Camille Coduri) and a boyfriend, Mickey (Noel Clarke). They live on a recognisable housing estate. It would seem quite soap-opera if it wasn't for the presence of The Doctor. I'll talk more about Billie Piper as we go on. Suffice it to say I remain as impressed with her performance now as I was then. A great piece of casting.

What of Eccleston? Well he's good. He's clearly much better at the serious stuff than the lighter stuff at this point but I am wondering how much of that is deliberate choice based on the Ninth Doctor being newly regenerated. (Yes, I know that's not explicitly stated but the mirror scene in Rose's flat suggests that it is the first time he's seen himself since his regeneration from Paul McGann, so I am going to stick with my belief that he's new to his body). He certainly has presence.

I wasn't sure about his costume to begin with, but I can see why he picked it. He's supposed to be inconspicuous I think and in the context of 21st century Earth it works.

However it is early days yet. I accepted him as a Doctor almost immediately so that's always a good sign, but first stories are never the best for judging how things are going to turn out. Just ask Colin Baker.

Which brings me to my one quibble: Mickey Smith. The way he's written makes him seem both stupid and rather cowardly. Now the latter might be a temporary result of the culture shock that comes from being kidnapped by a big plastic bin and then rescued in an alien space craft from aliens made of plastic. I can see that RTD's making a point about how not everyone reacts in the 'right' way to become a companion and perhaps Mickey is drawn more broadly there to show how cool Rose is in comparison but his stupidity doesn't quite work for me.

Rose is many things but she's not an idiot and I can't see her putting up with Mickey for a minute based on his behaviour and I don't like how condescending the Doctor is to him. It seems slightly odd (but again maybe to show that difference between those who are companions and those that aren't.)

If truth be told I suspect most of us would be Mickey not Rose when faced with alien attack.

I like Camille Coduri too but here again she's drawn with broad strokes as if to emphasise the dullness of the people that surround Rose. Perhaps I'm being unfair. O I should add the scene in Jackie's bedroom when she's flirting with the Doctor always makes me laugh.

There should also be a small round of applause for Mark Benton's Clive, a real-life Doctor Who conspiracy nut who turns out to have been right with his theory of who the Doctor is but only realises as he's staring down the barrel of an Autons gun.

So it's a good start. Lots of fun, lots of action, lots of running around but just the beginning. How will the Eccleston's Doctor develop? Is this the beginning of a beautiful friendship?