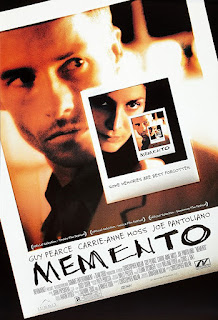 Some memories are best forgotten says the tagline, but not this one, as Kraig Taylor-Bryant discusses Memento (contains major spoilers)...

I first watched Memento when I was in school. Our teacher wanted to expose us to some complex, inspiring piece of film, and decided that this brilliant example of Christopher Nolan’s work was the best to do this, which, after seeing The Dark Knight trilogy, I really didn’t mind doing.


One of the clever things that this film does is incite deep meaning in the smallest things. Right from the start of the film it shows an image fading more or becoming more distorted as he shakes it to try and make it clearer. This implied to me that over time everything dies, and this loss is something which we can see very often throughout the film. We see this through the main character, Leonard (Guy Pearce), and not just through him losing his wife, but also losing his newest memories after a few minutes, he’s losing all of the people he meets within a matter of minutes. What’s interesting about the film is that since, because of the way it’s filmed, we only know as much as the character does at any point throughout the film, we don’t know how long he’s actually been working on this case, so it could have been a decade and we wouldn’t even know. Every day must also feel like, to him, he only just lost his wife, because that’s the only constant and most recent memory that he has when he forgets the new memories. This makes it almost seem like he’s losing his wife over and over, and this links to one of the most important quotes of the films “I can’t remember to forget you.” It’s this that really connects us with this man, who is forced to keep living with this raw grief for the rest of his life, separating him from any typical person who loses someone.

Another of the quotes that I find particularly important is one spoken by Leonard near the start of the film, or rather, near the end. “The world doesn’t just disappear when you close your eyes” is, for me, the most interesting quote, because very often nowadays we live through life with our eyes closed because there are many things in the world that we don’t know, or want to know, about, but this man is living with his eyes closed about everything because he doesn’t even know the things that everyone else does know, like who his friends are or why he is driving such a nice car. The worst part is, throughout the film, it seems that people continue to not give him answers, and that’s what’s making things continually difficult for him. Even the one person who he keeps relying on, Teddy (Joe Pantoliano,) he can’t trust, because he left a note telling himself to not believe his lies. There’s also the fact that he didn’t know about the woman, Natalie (Carrie-Anne Moss,) who he also considers a friend at many moments in the film, that she is associated with a drug dealer and she tried to manipulate him twice to get him to kill someone. So it’s through all these moments and more that he has his eyes closed, as he really doesn’t know what he’s doing, he’s just trusting his own notes, and, if they don’t tell him something, he is forced to trust those around him, who all seem to manipulate him at some point.

The film, in a way, also has a way of keeping the audiences eyes closed, such as in one of the moments at the end of the film when we find out that all the black and white phone calls, were actually, just a cop who was investigating him and playing mind games with him, which of course, we, as an audience didn’t know until Teddy tells him. The great thing about this film is that it’s made in a way that it has you feeling and experiencing things in the same way as Leonard. It’s also in the scenes in general, that we’re left wondering, as due to the backwards order of the film, we’re always left with questions, the same questions that, at many times, Leonard is asking, such as in the scene where Leonard is running and we don’t know if he is chasing a guy or being chased by someone. 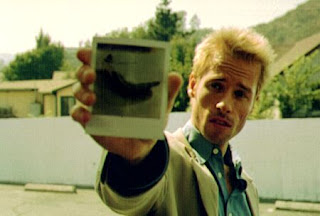 There’s a certain stage though where you have to wonder, who is the villain of this story? Is it Natalie, for the way that she manipulates Leonard to get him to kill people who are after her because of her association with drug dealers? Or is it Teddy for the way he goes along with Leonard trying to find the man who assisted in raping and killing his wife, when he had already found the guy and simply couldn’t remember it? Personally, I would have to say that if there were a villain in this story, it would be Leonard himself. The fact that he gets tired of being manipulated and decides to make himself think that Teddy is the man that he’s after makes you really question his morals as, if you see things from Teddy’s point of view, he just wanted to help Leonard continue living with a purpose, and that’s what Leonard wanted when he made that decision also, he tricked himself so that he could have a purpose, so in a sense, it is a little ridiculous to kill Teddy for this reason.

I think the overall morals of this film are that a man should simply not go out of his way to kill someone out of having some personal vendetta as they could end up killing the wrong person and, as a result, you have made yourself as bad a person as the person you were trying to kill. And that’s the kind of thing we don’t realise with Leonard; we see him kill two people in this film, one of them may have been a drug dealer, but he probably still didn’t deserve to die if he ended up being so easily intimidated by Leonard, and we don’t know how many Leonard has suspected to be his wife’s killer before this man.

And then there is the plot twist at the end… When we find out that it was Leonard who in fact killed his wife, it does almost make him sound like a psychopath, of course he’s looking for a guy who still raped his wife, but he killed her, and now he’s in search of a guy who he thinks killed her, which sounds kind of insane when you think about it.

Memento does a terrific job of telling us how a man with such a life defining mental illness can cope with living through the murder of his wife and finding out how he figures out where to go is what’s really interesting. Because not only does he simply leave a bunch of notes for himself, as well as on his body as a tattoo, but he also finds his ways of telling when someone is lying and relies on his gut feeling a lot of the time. This way he ends up almost always being right, but he can still interpret it wrongly such as when he thinks that everything he is doing is still for the reason he started, to find his wife’s attacker when, in actuality, it’s not. Then there’s also the fact that, in a few of his stories, he was actually Sammy Jenkins, and he kept retelling the story to himself and others to make him think that he didn’t actually kill his wife, this almost helps in making us realise that he has been driven mad by his wife’s death and he doesn’t even realise it.

Dealing with a lot of psychological elements and making you question the morality of all people in general, Memento raises a lot of questions, it has a way of boggling the mind, and helping every moment of the film to be memorable. It’s like a jigsaw puzzle; if you know what the finished picture is after laying out each puzzle piece, you are more likely to remember the pieces, whereas if you are simply looking at the finished product and it’s always clear what happens in the end, you won’t remember each individual piece of the puzzle because there would be no reason to remember the pieces, since you didn’t put it together yourself. If you as an audience are pondering the questions this film throws out and are figuring out where each moment fits to the film, you will realise the purpose of every scene and understand why it’s there.