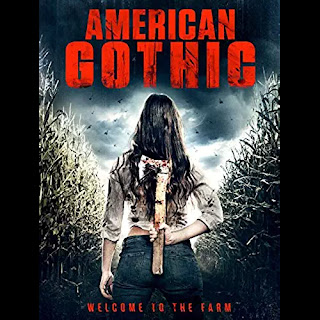 Available on digital release from Monday, and nothing to do with either the painting or the TV series, Ren Zelen watched American Gothic...

American Gothic begins with a prison bus carrying inmates veering out of control and crashing, which from the outset, seems a pretty good metaphor for this particular film.

Two of the convicts in the bus awake from unconsciousness to find that they are the only ones to have survived the accident. They are virtually unscathed, while the driver and the rest of the convicts, although mostly unmarked, are somehow, all dead. The two prisoners, Nick (Slate Holmgren) and Guy (Mark Barthmaier) see this as their opportunity to escape. Their getaway is hampered by the fact that they're chained together at the ankle, so first order of business is to break the chains.

Escaping over open country they are fortunate enough to come across an isolated farmhouse. Near to the house they spy what seems to be a workshop. Sneaking inside they find a pair of bolt cutters, which would be the appropriate tool to cut through their leg irons.

Unfortunately, the bolt cutters can’t be used, as strangely, the handles are firmly locked together with a padlock. Unable to cut off their chains there and then, Nick and Guy hobble to the farmhouse hoping they can find the key to unlock the padlock. They see that the lady of the house, Sarah (Rochelle Bostrom) is busy in the kitchen, but don’t know that her husband Bill (Ned Luke) is in working in the basement. 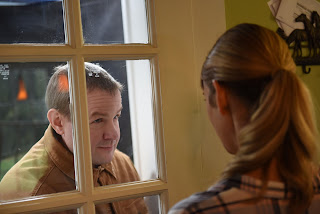 They force their way into the farmhouse, and when Bill comes up from the basement and tries to intervene, they threaten the couple and demand they hand over the keys. Bill agrees to find the key to the bolt cutters and cut them out of their chains, as long as they then leave the farm without any further trouble.

The trip to the workshop doesn’t go quite the way that Nick and Guy had planned, and the two fugitives soon find that the quiet country folk, Sarah and Bill, are not at all as harmless as they appear. As a cat and mouse situation develops, the two felons find that the couple have a myriad of secrets, one of which is incarcerated in a cage in the basement. A battle for survival ensues.

With a cast of five (six if you count a police officer) and a fairly conventional horror location, the actors need to work hard to build levels of creepiness and shock. Unfortunately, they don’t.

American Gothic starts off with a decent premise which unfolds into a reasonable story with a few twists, however, it is let down by odd pacing, an erratic narrative structure, and some very creaky acting.

Distracting plot holes appear from the beginning, some of which are explained in the denouement, but by that time we have had to sit through some oddly inconsistent behaviour and a tediously repetitive game of cat and mouse between captors and captives, hiding and chasing their way around the farmhouse.

Meanwhile, the fugitives help to free another prisoner from the basement who tells them a gruelling story of capture and imprisonment. Sadly, that particular performance is so devoid of passion or emotion, rather than feeling sympathy and horror, one can only wonder at the expressionless delivery of a speech that is meant to describe a violent, traumatic and life-changing experience.

As the film progresses, the story gets wilder and the acting gets weirder. As the title suggests, American Gothic purports to hide a layer of nastiness under a veneer of normality – it does attempt to present something of that kind, but offers it in the most mundane way, (if I felt any sympathy it was for Slate Holmgren as outlaw Nick, as he gamely tries to keep the whole thing afloat by putting some effort into his performance).

American Gothic writer/director Stuart Connelly is also known for The Suspect (2013) and Natural Selection (2016) neither of which I’ve seen, but presumably must have been good enough to provide the funds for this third effort. American Gothic certainly has potential, but hopefully, in his next feature, Connelly may be able to inject a little more passion into what should be an engaging premise.