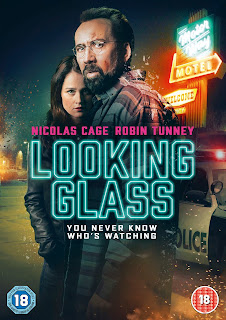 "You never know who's watching" says the tagline. Will it be you as Looking Glass comes out on Digital and DVD later this month? Watch the trailer...

After losing their daughter to a tragic accident, shattered couple Ray (Nicolas Cage) and Maggie (Robin Tunney) purchase a motel in the middle of nowhere in the hopes of starting a new life. But Ray begins to notice strange goings-on, and starts to piece together the history of a bizarre murder associated with the motel.

Poking around in a basement one day, Ray discovers a crawl space, which leads to a two-way mirror into one of the rooms. As he becomes obsessed with the unusual activities that happen beyond the looking glass, his marriage, sanity and his very life are threatened.

Starring the legend that is Nicolas Cage alongside Robin Tunney (The Mentalist, The Craft, Empire Records) and Marc Blucas (Buffy, Knight & Day), Looking Glass is a new thriller from Tim Hunter who is a noted television director known for Gotham, American Horror Story and classic era Twin Peaks.