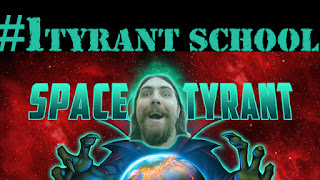 This one time, at Tyrant School... The Defective Inspector heads into battle with Episode 1 of his Let's Play of Space Tyrant by Blue Wizard Digital...

"Weld lasers to their hands! YES!"

This time DI Space Tyrant throws meteors at bunnies, laughs at a Red Dwarf reference and gets a bit cool around the Frigates