With eight days of video evidence to follow, The Defective Inspector starts off his Easter Binge of Space Tyrant with his written report...

Y’know what told me about this game? Facebook. Fucking Facebook. Shamefully I often get overwhelmed by the amount of new games floating around the internet that I do get lost in the shroud. This means I knew very little about the title going in and decided to try and do some Let’s Play footage while trying the game out, for an hour or two. The end result was 4 hours of me cackling like a madman demanding the Space Shark gets off my doomed slow research facility before my fleet of ducks pecks it to oblivion. Perhaps I should elaborate… 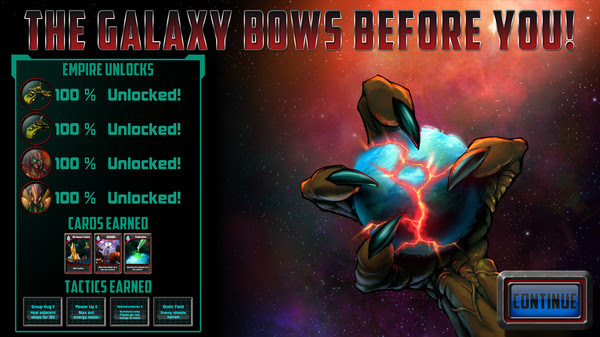 Space Tyrant calls itself a beer and pretzel strategy game and that is a fair description. Rather than the oceanic depth I’ve come to both love and endure in the strategy genre Space Tyrant streamlines the whole thing and makes it about what most people want, space battles and nerd references. Deceptively it builds on you, making the game more complicated, but it never truly becomes excessive or overbearing. The focus of the game is familiar; collect research to improve your ships, fight the galactic senate to keep your tyranny up and generally expand like the melomaniac we hide deep in our subconscious. The thing to remember is that while the game is beer and pretzels it’s certainly not easy. Between various ship types, randomly generated maps, unique planet bonuses and a huge compendium of cards to use in game there are enough snacks and alcohol to keep the party going.

I want to say that there are 3 factions, but there are not. In very retro fashion you must earn these other factions through hard work and progressive improvement. While you do meet these other factions as two-dimensional opponents actually toying around with their powers and skills won’t be possible without completing the first campaign. Now campaigns traditionally are rather easy on strategy games and merely act as a giant tutorial for online gameplay. Space Tyrant would rather you played solo via the campaign in a rogue-like way where defeat is merely a matter of progress. Each time you play you will unlock new overlords, technologies, skills, cards and equipment. My first playthrough was entertaining but ultimately unsuccessful and rather than feel defeated I felt inspired to try again. By giving me something in my defeat which could potentially improve my chances in the next playthrough I had to resist marching forward as I’d already siphoned 4 solid hours of gameplay when I only planned on 2. This is the sort of game where 5 more minutes is just another lie we tell ourselves. 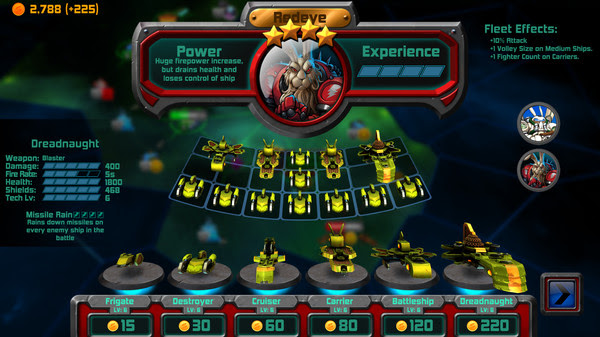 The core of the gameplay is the space battles and they are not as interactive as I would have liked. Granted I enjoyed the energy spending mechanics, passive firing system and tactical planning through research I cannot help but loathe the inability to command my ships to fire on a particular target. You see the ships just do whatever they like only allowing you partial instruction like firing an extra volley or healing a ship through a special power. Paradoxically this was rather gripping to watch when matches were close, I would cling onto my desk praying that the cruiser would fire just one more missile at the opposing battleship before it’s horrible laser cut me apart. The process is bitter sweet, but I can appreciate why it needs to exist. I think having too much control would of made the game a little too easy.

Visually I loved the game, it somehow allowed itself to be colourful and energetic without being offensive or childish. The neon blaster rays and torpedoes flying past my eyes never felt offensive and I was often mesmerised as battles unfolded. The music balanced the pace of gameplay rather well and the sound effects were retro but polished. You can tell the people who made this wanted to match the gameplay and aesthetics to have a theme; straightforward no-nonsense fun.

It’s no surprise this game is addictive, it comes from the off the wall mind Jason Kapalka, famously known for being a cofounder of PopCap (the fellows who made the critically acclaimed Plants vs Zombies). Diverting off to make Blue Wizard Digital you can feel the essence of what made PopCap great transferred into Space Tyrant. The dialogue is cheeky but not rude, the colours are vibrant but not damaging, the gameplay is simple but addictive. These qualities reminded me of Plants Vs Zombies so much I almost forgot PopCap had been eaten up by EA, so I need to salute Jason for branching out and keeping your spirit untarnished. 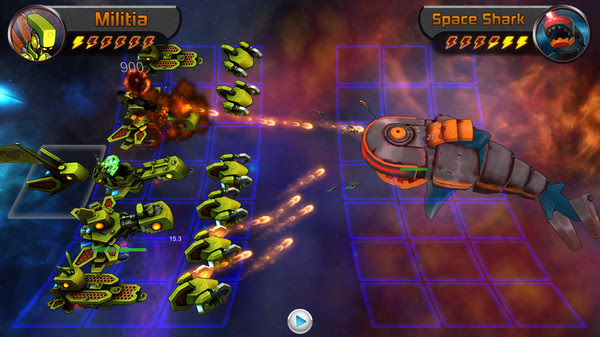 The overall verdict of Space Tyrant is pretty much like the game itself; direct. It’s a fun, vibrant, amusing romp through the universe where simplistic gameplay coupled with complicated scenarios lead to a genuinely enjoyable game that could easily become an indie classic. Oh and it has Space Sharks… With lasers… For faces. Did I not mention that earlier?