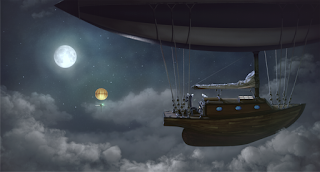 
Two travellers return to a place crossed by stars and clouds where love is at the beginning of everything.

There’s a lemur making coffee on a boat up in the sky.

If you, like me, are captivated by this as a thought, you will adore Two Balloons. The story itself is straightforward but beautifully told in stunning stop-motion animation with no dialogue or written explanation spoil the mood, just elegant music to enhance what is happening on screen.

Watching it immediately put me in mind of two things; the animation style and detail reminded me of a beautiful little film called The Maker that I reviewed a couple of years ago and the simplicity of a story told so evocatively with no dialogue is so reminiscent of the Eastern European animations that I watched when I was young.

It really is all about the animation here. It. Is. Beautiful. The attentiveness to detail, with the maps and the dials, the jars of fruit and the gorgeous flick book is surpassed only by the three characters themselves, two gorgeous lemurs and a seabird that acts as messenger. It really must have taken ages to animate because the lemurs’ movements are so fluid and natural, with the constant flicks of eyelids, the dexterity of fingers and twitches of those long luxurious tails, they are never still. And I think that naturalness of movement helps the viewer to really buy into their characters because I found that although, yes, they are anthropomorphised (they are after all piloting balloons and making coffee) they still felt like animals, not humans. Couple that with the whole animation having an almost dream-like storybook quality rather than trying to be either too real-world or cartoonish and I found myself settling into that childhood place of accepting all that I watched as being true.

If you thought that animated lemurs began and ended with the annoying King Julien in the Madagascar films, this short film will change your mind. I loved it.

Find out more about the film at https://www.twoballoons.film
Email ThisBlogThis!Share to TwitterShare to Facebook