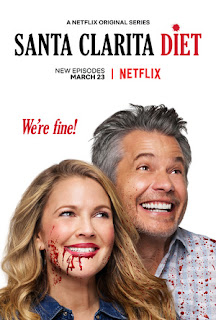 With "all the spoilers in the world" Steve Taylor-Bryant binges on Season 2 of Santa Clarita Diet...

Season 2 picks up where season 1 left off and it hasn’t missed a beat. Joel in the asylum, showing that Timothy Olyphant can pull off this style of humour without having to be stood next to Drew Barrymore all the time, is where we start and Gary in a vase in the desert is where we end. That starting point and journey to the finish is just as madcap, batshit crazy as the first season but you as the viewer can relax more into the humour this time as the character development and introductions, difficult in just 10 episodes, is already done. What I love about Santa Clarita Diet, aside from my 30-year obsession with Drew Barrymore, is that it doesn’t take itself seriously. The writing is hilarious, the situation is so crazy that they can get away with anything and often do and it’s an opportunity as a viewer to just and unplug your life for a few moments and just be thoroughly entertained. When a concept is as mad as some kind of Serbian "thing", that we find out in season 2 has infected some clams (some clams for Pete’s sake!), is making certain people undead and those people are now murdering other people whilst just trying to live a normal life, there is no point trying to sit and find holes in the plot, just watch and laugh.

Highlights of season 2 include the storyline of the lesbian, highly religious policewoman, Anne (Natalie Morales) who is making headway into the disappearance of Gary and Dan, whilst being convinced to back off by Sheila (Barrymore) and paint instead only to find out that Anne is painting all the clues and evidence so far including how nervous Joel (Olyphant) is all the time. Eventually at the end of the season Anne gets to find the truth and Sheila it appears has started a new religion on the back of that. Other highlights are the chemistry between Abby (Liv Hewson) and Eric (Skyler Gisondo) who I found to be both too geeky in Eric’s case and too high school girl in Abby’s case in the first year but now seem to gel together and that makes for some really explosive scenes (when you watch the last episode you’ll get that joke and I’ll still be wasted on you like I was in first review).

You’ll have to go a long way though to beat Nathan Fillion, as a head, in a vase. Honestly, he is the scene stealer and has proved yet again that he can be the best thing on television.

I can only hope for a third season now as shit is about to get real!