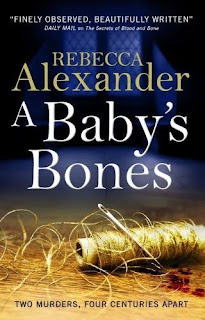 Read an extract from the book here.

Archaeologist Sage Westfield has been called in to excavate a sixteenth-century well, and expects to find little more than soil and the odd piece of pottery. But the disturbing discovery of the bones of a woman and newborn baby make it clear that she has stumbled onto an historical crime scene, one that is interwoven with an unsettling local legend of witchcraft and unrequited love. Yet there is more to the case than a four-hundred-year-old mystery. The owners of a nearby cottage are convinced that it is haunted, and the local vicar is being plagued with abusive phone calls. Then a tragic death makes it all too clear that a modern murderer is at work…

This, quite literally, is a story of two halves as the chapters in the book physically alternate between the present-day events and memoir journal entries by a character called Vincent Garland, steward to the Lord of the local Manor from the 1500s, meaning that the story of the bodies found in the well develops concurrently in two different timelines. It also means that, should you want to, you can get the story by reading every second chapter and just follow the modern-day narrative. However, the 16th century journal entries do add an extra level of richness and vivid description, helping to bring to life the historical side of the story, so were a nice addition if not strictly necessary to the plot for me. I must say though, on a purely practical point, even if it was very pretty to look at, I found the ornate typeface used in the headers for the journal entries very difficult to decipher (see below for an example) and stopped trying in the end, but the illuminated drop cap at the start of those chapters was a neat touch.

As for the main story itself, it was not bad at all. A major plus point was that it didn’t feel like it was “just” the first book in a series as both the story and characters stood well on their own. The pacing was a little slow for me in the first half of the book but that allowed for solid groundwork, good character building and the intensity built up well as the pages progressed. I also found the plot was a little predictable at times, I guessed who’s and where’s correctly (although not often the why’s) before they happened, but that’s not necessarily a bad thing as it meant I could enjoy the build up more and it made the twists work better when they came – and there were still a couple of moments that managed to astonish me. It also seemed like the technical, scientific and sociological aspects in the details of Westfield’s work were very well researched and plausible and I found the historical and occult element of the book, looking at witchcraft and alchemy, absolutely fascinating. It didn’t feel far-fetched at all, as it was neither over-sensationalised nor derided so didn’t feel at all out of place in the story.

I’m a huge fan of Kathy Reich’s Bones books (which are very different to the TV series btw) and Dr Sage Westfield comes across as a younger version of Tempe Brennan, with the same aura of academic thoroughness and personal confidence, and she’s well supported by both believable experts and quirky family to make an interesting ensemble cast. They are all characters that I will enjoy seeing progress in the promised series of books to come.

A Baby's Bones was published by Titan Books on May 1st