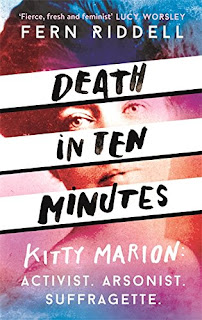 This is a fantastic book.

The astonishing thing about this book isn’t that Marion was involved in terrorism – it is a strong word but the only one that can really apply to the scale of the Suffragette campaign of violence – but that the scale of what happened has almost been entirely forgotten by British society. People remember the martyrdom of Emily Wilding Davison – but even that story was cleaned up - and they might know of women being imprisoned, force-fed and have heard of ‘The Cat & Mouse’ Act but the full level of governmental cruelty has faded away in the same way that the arson, bombings and chemical attacks by the Suffragettes have dropped away too. The fact that there were no deaths seems more a matter of luck than judgement. How violent would these protests have become if World War One intervened?

To quote Dr Riddell there was “A determined sanitation was already underway as the creation of the perfect ‘Suffragette Spirit’ – a noble heroine whose purity and morality was the reason men had come to their senses and awarded women the vote – became the idolised cultural memory of the fighters of the WSPU.”

Marion’s story is one well-worth the telling. It would make a fantastic television series, although Marion’s lack of a love life might put off those who like a little romance in their stories. Marion never seems to have needed male approval or male love in her life. But that shouldn’t be mistaken for a woman who didn’t understand sexual desire or who disapproved of it. Dr Riddell also uses Marion’s story to illustrate how feminism has struggled to deal with female sexuality creating a false separation between sexual desire and respectability. This latter issue helps explain why Kitty Marion – and others – have been quietly pushed out of the historical record.

This book benefits from Dr Riddell’s work on Victorian sexual desire and there too society seems to have created a false memory of sexual ignorance and naivety. The classic example being the idea that women were expected to ‘lie back and think of England’ because no one had any idea about the female orgasm. This is nonsense. It’s not my place to explain why here but look at Dr Riddell’s other book, ‘The Victorian Guide to Sex’ for an expert’s view. Dr Riddell is a cultural historian and she seems to have found a way of digging out parts of our history that have become foggy in the cultural memory.

Interestingly, I started reading this at the same time as Svetlana Alexievich’s ‘The Unwomanly Face of War’, which talks about memory and history in a similar way to Dr Riddell. Indeed, a quote from that book seems to apply to Kitty Marion herself. Alexievich talks about history and says “But the narrators are not only witnesses – least of all are they witnesses; they are actors and makers.” Marion was both the narrator of her own story, a witness but most importantly she was an actor. Part of events forgotten and deservedly now dusted off by Dr Riddell.

I can’t recommend this book highly enough. It’s brilliantly written, lovingly researched and reminds us that history isn’t always what we think it is. It is also a reminder that whilst much has changed since Kitty Marion died in 1944 a lot hasn’t. The power dynamics might have changed a little, but women are still exploited by men in power and men are still trying to hang on to their privileges.

The story of Kitty Marion is the story of a woman who stood up to be counted. A woman who was punished for her beliefs and activities and a woman who history tried to make invisible. Dr Riddell deserves applause for pulling Marion out of the fog of history and helping tell her story.