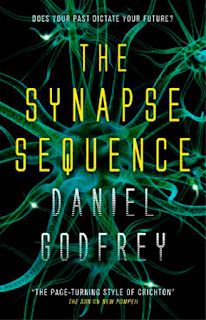 In a future London, humans are watched over by AIs and served by bots. But now that justice and jobs are meted out by algorithm, inequality blooms and protest is brutally silenced.

Anna Glover may be the most hated woman in the troubled city – a scapegoat blamed for causing the government’s latest unpopular war. Now she hides from the public eye, investigating neglected cases by using the mind-invading technology of the synapse sequencer to enter witness’s memories. When a PI appears with a new case – can she enter the mind of a comatose young man to find out who attacked him? – Anna sees it as a chance to atone for her past. But soon she is drawn into a plot that threatens to upend her hard-won anonymity and put everyone in danger – even those she hopes to save.

An uneasy glimpse into the future of technology for fans of Michael Crichton and Philip K. Dick.  Godfrey has woven a story  in the vein of Black Mirror that will intrigue and alarm in equal measure.

Daniel Godfrey has had several short stories published, including in My Weekly and Writers’ Forum, and is a dedicated reader of SF and historical fiction. He studied geography at Emmanuel College, Cambridge, and gained an MSc from Leeds in transport planning. He lives in Derbyshire. His debut novel, New Pompeii, was released to huge critical acclaim in 2016.

The Synapse Sequence is published on 19th June by Titan Books