Doctor Who - Fear Her 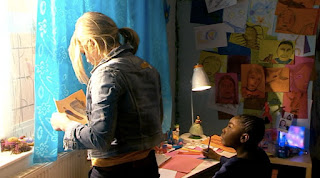 Our Doctor Who expert, Tony Cross, is journeying through all of time and space to bring us his thoughts on every available Doctor Episode. Today is the Tenth Doctor adventure Fear Her...

I was dreading re-watching this. I remember watching this at the time and thinking it was awful.

This is terrible. It isn't so much the plot, which has aspects of interest. The atmosphere to flirts with being quite dark and scary. But...oh the buts for this one.

Unfortunately, it is let down drastically by some awful acting.

I'm loathed to criticise child actors, but Abisola Agbaje as Chloe Webber is horribly wooden. I'm sure she'll grow up to be a fine actress someday but for me her performance makes the whole thing unbalanced, which is a shame as her story is a moving one: the lonely, abused child threatened by post-traumatic nightmare

It doesn't help that the conclusion is narrated by the most wooden voiceover by Hugh Edwards (who isn't an actor so I don't really blame him either). I particularly don't blame him for the huge amount of cheese piled on at the end. It's one of the first of a those 'saved by love' stories that infest New Who.

Love being effectively a McGuffin in the New Who Universe, which is an insult to an infinite number of poets. Love shouldn't be a get out clause for writer's struggling to find a way to wrap up a story. It's not the sonic screwdriver.

But forgive the rant.

There's something about this story that really irritates me. It's like everyone knew that this was a placeholder before the main action begins in the next two episodes, so eyes were taken off the ball and Matthew Graham's script got turned into something much worse than it deserved.

There's a lot of dodgy performances from the supporting cast. I can't really fault Tennant and Piper, although there is a bit too much of the rapid smuggery from the Tenth Doctor again for my liking. However, I think Billie Piper's pretty good, even at the end which is as blatant a signpost for what's going to happen next. Rose might as well be wearing a 'New Who Companion: Best Before 1st July 2006' T-Shirt.

I'm sorry to be so negative because I can see inside this is a good story fighting to get out. About love, loneliness and family. About fear and what it can do to us. It would be dark and atmospheric. It could still have a cheesy ending, but without Hugh Edward's voiceover.

There are bits of it I like. I like how the pictures 'live'. I love the 'Scribble Monster' and the bit where the Doctor rubs a little of it out is neatly done. I like the Doctor's 'not a cat person' line. I like how frightened Trish (Nina Sosanya) is of her daughter and the Doctor's little speech about 'out of the corner of your eye'.

But the final product is a let-down.

Maybe someone will let Matthew Graham do it again and they'll do it better one day. Like Robert Holmes made Caves of Androzani out of The Power of Kroll.