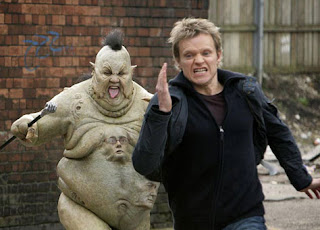 Our Doctor Who expert, Tony Cross, is journeying through all of time and space to bring us his thoughts on every available Doctor Episode. Today is the Tenth Doctor adventure Love & Monsters...

Well, I loved that. With one major quibble & a couple of minor ones.

The major quibble is Peter Kay. As Elton himself says, LINDA was great until Mr. Kennedy came along. And Love & Monsters is ticking along rather nicely until Peter Kay turns up. It isn't a bad performance, it just tonally too jokey.

I know this isn't meant to be the most serious of episodes, even if it does make a serious point about fate of those left behind and about life being stranger and madder than we are led to believe, but everyone else stays just the right side of that invisible line between light-hearted and unsubtle. I don't think that's necessarily Peter Kay's fault because that's how I suspect he was asked to play it. The problem is it unbalances the episode.

Everyone else does a great job. Marc Warren as Elton must hold together the episode and does so rather well. It is the first of the 'Doctor lite' stories & uses the Doctor's occasional appearances to revisit some of the themes in Rose about how dangerous it is to 'touch' the Doctor, even just a little and the impact it has on friends and family: they also serve who only stand & wait as the poet says.

Perhaps the reason I enjoyed this was I *know* Elton. In some respects, I AM Elton. Yes, LINDA is clearly modelled on Doctor Who fandom, but it is a rather sweet little group and inside the tale is the truism that after a while The Doctor becomes the excuse for meeting people who have become your friends. The Doctor is a topic of conversation, but not the only topic. Sometimes he's not even the main one. And then someone comes along who takes it far too seriously and spoils it for the rest of us.

Shirley Henderson is a sweet but strong Ursula; Simon Greenhall is awkwardness personified as Mr. Skinner; Moya Bradley does a similarly good job as Bridget, the woman looking for her daughter and Kathryn Drysdale as Bliss is a smarter version of her character from Two Pints of Lager & a Packet of Crisps.

The highlight for me though was Camille Coduri's return as Jackie Tyler. She's magnificent. The scene in the laundry is brilliant witty writing by RTD. He might over-step the mark with one line at the end, which isn't necessary but apart from that & the rather silly Benny Hill chase at the beginning this is lovely writing.

As I said it doesn't all work, but this is far, far better than it gets credit for. It's a not a classic but by Jove it is fun and at points just a little moving.

And yes, I'm as surprised as you.