Doctor Who - The Impossible Planet & The Satan Pit 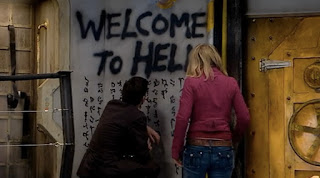 Our Doctor Who expert, Tony Cross, is journeying through all of time and space to bring us his thoughts on every available Doctor Episode. Today is the Tenth Doctor adventure The Impossible Planet and The Satan Pit...

There's much to praise in this Matt Jones scripted two-part story.

It's well-paced, well-directed and atmospheric as hell. An old-school base under siege scare fest. There's a dark, sinister voice - the work of Gabriel Woolf who memorably voiced Sutekh all the way back in Pyramids of Mars - with the worst of intentions. There's possession: of Toby Zed (Will Thorp), of communications and en masse of the Ood.

The Ood are an excellent addition to the Whoniverse* and Rose's reaction to their slave status is correctly shocked and a little disgusted. "Why do human's need slaves?" she asks. It's a question worth answering and the fob offs from the Sanctuary Base crew might as well be a litany of the excuses humans have used forever to justify slavery. "The deeds of men" indeed.

And now I'm going to have to reel back a bit. You'd think by now I'd be getting into the swing of this reviewing lark.

Basically, the Doctor and Rose turn up in a cupboard on a 'Sanctuary Base' that turns out to be sitting on a planet that shouldn't be where it is. An Impossible Planet you might say if you were so inclined. It orbits a black hole, which of course is impossible. But like Alice I try to believe three impossible things before breakfast and it is a rather impressive idea. Even more so when it turns out to be a massively elaborate prison for....well...for something at the high end of the unpleasant scale.

They then lose the TARDIS forever setting up one of the more irritating scenes in Doctor Who history when the Doctor contemplates settling down in one permanent location and Rose tries fishing for a commitment to - well, at minimum house share. I know I'm going to come across like a miserable, grumpy old-school Doctor Who fan but I found Rose and the Doctor spectacularly irritating in this story. I've said before how their relationship is beginning to make me feel excluded from their adventures and this is a perfect example.

I ended up caring more for the members of the Sanctuary Base crew than I did Rose and the Doctor, which is not what the production team are aiming for. When, right at the end, the Doctor talks about swapping Rose for Ida (the brilliant Claire Rushbrook) I almost wanted him to say.... no. I'll take Ida. O Ida would have made a great companion. But obviously that's not going to happen. The Rose and Doctor relationship must continue its path, which contains - like capitalism - the seeds of its own destruction. For however wonderful the Doctor & Companion relationship is, he can't settle down and fall in love properly because...well that's not Doctor Who. That's a whole other television series. 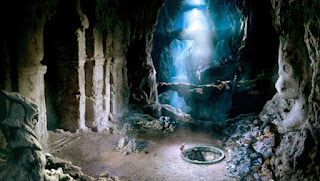 And I'm sorry to go on about this but when I find myself shouting 'Oh for heaven's sake get on with it' at David Tennant during his Rose speech to the Horned One then there's something wrong. That wrongness is probably mine. I admit it.

Anyway there's something trying to escape. It might be the devil. Or it might not. The idea of a devil shakes the Doctor's own belief system. And its talk of 'before time' drives him to distraction. But we never learn what The Beast is. Or where it comes from, which I don't mind. Let's find space in Doctor Who for loose ends. Not everything needs to be tied up. The real world is untidy, perhaps the Whoniverse can be sometimes too.

Fundamentally the best bits in this are in The Satan Pit. The conversations between Ida and The Doctor. I like that. It feels intimate without being exclusive and it feels like they are talking about meaty stuff and you know things are bad when the Doctor chooses to retreat from entering the Pit. At least initially.

The supporting cast do a fine job too and MyAnn Buring as Scooti Manista gets one of the more disturbing exits of any character in Doctor Who history. Danny Webb as Mr. Jefferson gets one of the most stoic. But overall, it’s a strong cast doing good work with the addition of exceptional voice work from both Gabriel Woolf (the aforementioned) and Silas Carson doing the Ood voices. When the Ood go bad it is very creepy indeed.

I suspect this is one of those stories that would have had me hiding behind the sofa as a child.

In the end it is a solid base-under-siege story supported by an attempt to be more than just an adventure story. The talk of faith and the Doctor's 'Ark in Space ‘esque tributes to the brilliance of mankind add something to the story.

I enjoyed it, which is the best thing that can be said of any Doctor Who story, even if I do have grumpy middle-aged Doctor Who fan quibbles about the Rose-Doctor 'get a roomness'.

*No, I don't like the word Whoniverse either, but needs must as the devil...oh