Doctor Who - The Girl in the Fireplace 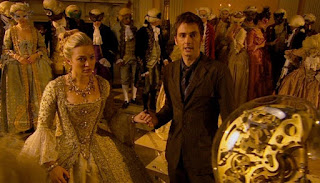 Our Doctor Who expert, Tony Cross, is journeying through all of time and space to bring us his thoughts on every available Doctor Episode. Today is the Tenth Doctor adventure The Girl in the Fireplace...

Written by Steven Moffat, 'The Girl in the Fireplace' shares its author's fondness for exploiting the time travel elements of Doctor Who. Its use of time windows to skip from moment to moment of Reinette's life is interesting and a good way to illustrate the complications of the Doctor's life.

Indeed this story compliments and reinforces some of the themes of 'School Reunion': that the Doctor can take the short road whilst his friends and companions must be content with the long road built of hour that follows hour and day to day even unto the last syllable of recorded time; that humans grow old whilst the Doctor doesn't and that the Doctor is alone. Reinette says that he was lonely as a child, lonelier now, which is genuinely one of the saddest lines of dialogue I've heard.

This story rests on a brilliant performance from Sophia Myles as Reinette. The brightest star in the 18th century French court, Mistress of Louis XV and rather fetching to look at. She gets several excellent scenes, but my favourites are her scene with the Doctor where he does the Gallifreyan mind meld on her and she gets into his mind too. The other is her discussion with Rose that ends with her stepping aboard the spaceship for a few moments. But the most moving moment is just a single, heart-breaking 'No' when the Doctor, trying to get back to Rose and Mickey, asks her to wish him luck.

David Tennant is also rather good again throughout, although I could have done without the wink and the 'I've snogged Madame de Pompadour' bit but that's just me.

There's some Moffat trademarks apart from the timey-wimey stuff. There is talk of the Doctor dancing: "There's a time when even the loneliest boy must learn to dance" (Or words to that effect.) And then there's the Doctor who question, which Reinette asks and suggests is more than just a secret. So, the Moffat's deviousness is long term, not just for a season.

Billie Piper is a little side-lined again with the Doctor focusing more of his time with Reinette plus the addition of Mikey, who I like more and more with every story. His gradual change has been an interesting one, even if he doesn't settle into the companion’s life as easily as Rose. There's something of the ordinary bloke about Mickey's reactions that I like.

To conclude this is a clever and moving episode, with an exceptional ending. It might have done with being one or two stories away from 'School Reunion' because whilst it echoes that story it also risks the Doctor looking like a bit of a serial heart breaker.

Oh and the Clockwork Men are a lovely piece of design. Slightly creepy with their masks on and then lovingly crafted when off. It might just be me but there's something aesthetically pleasing about clockwork.

So good story, well-acted and rather touching.