Doctor Who - Rise of the Cybermen & The Age of Steel 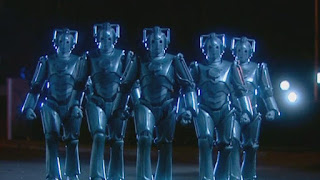 Our Doctor Who expert, Tony Cross, is journeying through all of time and space to bring us his thoughts on every available Doctor Episode. Today is the Tenth Doctor adventures Rise of the Cybermen and The Age of Steel...

The Cybermen are back! The one or two readers that have been following these articles since the beginning will be aware that I have become a little sniffy about Classic series Cybermen. Their stories are regularly a wee bit disappointing. Equally I have sung the praises of Big Finish, who seem to do bring out the best in the Cybermen.

So the first encounter with the Cybermen in New Doctor Who was always going to be interesting. Overall I think it works pretty well, although I do look back fondly on Cybermen in moon-boots and cricket gloves. I miss their fist thumping 'Excellents!" But I know this is all nostalgia.

The first thing to say is that new alt-universe Cybermen (who should really be called Cybusmen) look fantastic. The tear drop mask (and there's something truly tragic about that tear drop), the solid metallic look and their clumping unified march gives them an impressive screen presence.

I don't know whether it was show runner RTD or the writer Tom McRae who made the decision about setting this story in an alt-universe but it is such a simple way to re-boot the Cybermen and lift some of the weight of continuity off of their backs, even if I do miss all the David Banks levels of Cyber history. Unencumbered we get a new creation story for them via dying businessman John Lumic (Roger Lloyd Pack) on an alt-Earth, which is fine as it goes but does edge rather close to Dalek mythology with the wheelchair bound Lumic sitting in for Davros.

Lumic however isn't as memorable a creation as Davros. Partly because Roger Lloyd Pack's performance is a little too arch for my liking. It's like he's trying a little bit too hard and partly because of his conversion just makes him just another Cyberman. 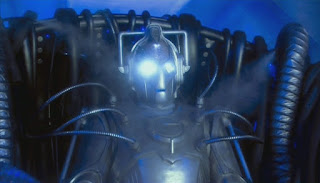 The alt-universe also gives us a chance to tempt Rose with her father being alive (again) and the story of her interactions with the alt-Jackie and alt-Pete are a core part of the story. But there's no Rose is this alt-universe. Pete and Jackie never had kids.

He's been badly treated: by the Doctor, by Rose and here by Ricky's friend Jake but here in the alt-universe he gets a glimpse of what he could become and what The Doctor and Rose have become. It's rather sweet that Rose gets so upset at the end but it is nice to see Mickey the Idiot unleashed. Indeed if there's one character in New Doctor Who that has come the furthest it is Mickey, which is rather lovely. And at the end he almost gets to be Rick from Casablanca.

The one thing that this story did do well was to re-introduce the horror element of the Cyber conversion process. To make Cybermen scary again. None of this fainting at the sight of a gold coin stuff. This story makes you realise how horrible that threat of 'You will be like us" truly is. The scene in the corridor with the damaged Cyberman who is 'so cold' also hammers that home rather darkly. So well done to Tom McCrae for that.

There's a couple of minor quibbles re. silent Cyberman sneaking up on the Doctor and Mrs Moore (Helen Griffin). Mrs Moore seems to be one of those characters we are permitted to know and like just so her death can have impact. My other quibble is about how The Doctor knows Mickey is watching him on the security camera. It's not really explained, unless I missed it but without that and the Cyber Controller's desire to engage in a debate with the Doctor the good guys might not have won. Oh and how does Jackie Tyler remember who she is?

Tennant, Piper and Clarke are all rather good here, which helps. I particularly like Clarke's scene on the doorstep with his grandmother (who is alive in the alt-universe), which is both nicely written and played. I also like Shaun Dingwell's Pete Tyler.

A good first Cyberman story for the New Series, which is nice.

Next up, 'The Idiot's Lantern'.