Doctor Who - The Idiot's Lantern 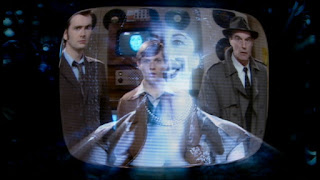 Our Doctor Who expert, Tony Cross, is journeying through all of time and space to bring us his thoughts on every available Doctor Episode. Today is the Tenth Doctor adventure The Idiot's Lantern...

I didn't remember anything about this story from my original watch in 2006, which surprises me a bit. It's not that it is a brilliant story. It's distinctly average really but it is unusual for me to remember absolutely nothing about a story.

I thought The Wire was a suitable creepy villain, even if I was less than convinced about the explanation of her attack methodology and the ease by which one can recover from it afterwards. The mind suck thing might just work but what's the deal with the face sucking? It doesn't really make sense* but it is nicely sinister so that's what counts I suppose.

So kudos for Maureen Lipman's performance, especially as she (I assume) didn't get much interaction with the other actors. She's got the perfect ability to put ice beneath the posh, which makes for a good villain in my small book of things that make a good villain.

Poor old Mr. Magpie (Ron Cook) does a good job as the henchman acting out of fear and loathing rather than a real desire to do evil.

The thing that didn't ring quite true - or maybe wasn't needed - was the whole Connelly family saga, which felt like Mark Gatiss was taking a writing sledgehammer to make a point about fascism and the changing generations. Eddie Connelly (Jamie Foreman) is a domestic tyrant, his son Tommy (Rory Jennings) is bright and wants to go to college (and might be gay, or might not be) and his wife Rita (Debra Gillett) appears bullied, whether this is limited to verbal or is physical too I don't know. We certainly never see him raise a hand.

Eddie is also called a coward, for grassing up the victims of the Wire.

Eddie fought in World War Two, which doesn't excuse his behaviour, he might have been a bastard before he went to war but war (and experience in it) does strange things to people and whilst making unsubtle digs at fighting fascism to become a fascist you might also have been able to make a point about the damage inflicted on soldiers by war.

It's Rose who gets Tommy to go after his Dad, 'because he's your Dad' (which makes sense in view of Rose's past) but equally the Doctor could have said something about how war changes people and perhaps Eddie wasn't always like this. (A perfect example of how perceptions of a parent can be changed by discovering their experiences in war watch Patrick Stewart's 'Who Do You Think You Are'.)

Maybe Mark Gatiss never wrote him like that. Maybe Mark's version of Eddie was always a coward and that perhaps he spent the war without seeing the front line once. It happened. So maybe I'm being unfair or obsessive or too kind to a genuine bastard. The fact that Tommy does go after him suggests he's not entirely bad.

Anyway, the dangers of reading too much into a story.

I liked the scene with the Doctor and Detective Inspector Bishop (Sam Cox) when the Doctor flips the whole power relationship around in the space of a couple of sentences. Tennant's a bit less impressive when raging after seeing what's been done to Rose. Perhaps its because the line he's given is so rubbish that he can't quite bring himself to say it. Plus it's shouty, which doesn't really work for the Doctor. Tennant's so much better at quiet anger and quiet threats. When he's shouty it's just another angry bloke. Less shouting Doctor please.

Poor old Billie Piper gets put on ice for a chunk of this episode so, apart from a bit of standard flirting at the beginning, and a nice bit of investigating - which leads her into danger - this is not one of the best episodes for Rose fans (but her smile at the end is simply amazing [Yes, I know]).

So file under entertaining but underwhelming and move on to the next episode(s).

*Yes, I'm aware that quibbling about this stuff when the fundamental basis of the series you're watching is an alien travelling through time and space in a Police Box which is bigger on the inside etc. is rather pointless but I like stories to vaguely make sense.