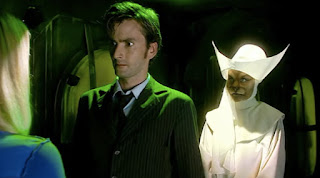 Our Doctor Who expert, Tony Cross, is journeying through all of time and space to bring us his thoughts on every available Doctor Episode. Today is the Tenth Doctor adventure New Earth...

I was dreading re-watching this. I wasn't that impressed with it on original transmission and the last time I'd tried to watch it I got so annoyed with it after about five minutes - somewhere around the moment when the Doctor says "We had chips" - that I had to turn it off.

This time round it wasn't quite so bad.

All that Rose and Doctor lying about in the grass gazing and smiling at each other is still disgustingly twee for me. It's also the first time in my entire Doctor Who watching life where I felt excluded from the fun. I felt less like a viewer, more like a gooseberry. I'm going to sound like a miserable old git here (probably because I am one) but for me Doctor Who should never, ever be about watching two pretty people fluttering their eyelashes at each other. There are plenty of other television programmes for that.

The thing is though - and I've found this with a lot of New Doctor Who - it entertaining stuff. It's only afterwards that you find yourself going..."Hang on...what about...?" It's like that feeling I get every time I have a Kentucky Fried Chicken. It is sort of nice whilst I'm eating it but afterwards you know you've made a terrible mistake and that whatever it is you've just eaten it bares only a distant relationship to nourishment. That's how I feel about a handful of New Doctor Who stories.

There's still some good stuff in here. Billie Piper is excellent and funny as hell when playing the 'occupied' Rose. It's genuinely quite amusing and mildly frisky for Doctor Who with all those jokes about curves. But it works.

I'm still not sure about David Tennant at this point and I'm not sure how much of that is because of the performance and how much is the writing. I'm also aware that it is early days yet and every actor playing the Doctor takes time to settle in. I think it is the combination of arrogance, which teeters far too close to smugness, and the 'hugging Messiah' tendency that seems to have popped up. He's at his best though in the quieter moments, his chat with The Face of Boe for example and in the last five minutes or so when he does something rather lovely for someone who might not really deserve it.

So this isn't particularly great but entertaining enough. I suppose I shouldn't be too snarky as if nothing else Doctor Who must be entertaining. It's the dull ones I can't forgive but thankfully they're a few and far between. Well, the dull ones and the truly idiotic ones. This isn't quite that but as I said for the first few minutes it teeters dangerously towards making me feel excluded, which ain't good.

And it’s still early for Tennant so I'm not going to get too bothered about things. Let's see how the rest of the season pans out.