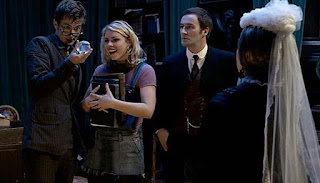 Our Doctor Who expert, Tony Cross, is journeying through all of time and space to bring us his thoughts on every available Doctor Episode. Today is the Tenth Doctor adventure Tooth & Claw...

This is such an improvement on 'New Earth'. It feels less like we're gooseberries intruding upon The Doctor and Rose's coupledom and more like a 'proper' old school Doctor Who adventure.

It rattles along at a fair pace but still has time to breathe. It allows us one or two character moments - Queen Victoria's little monologue about missing her husband for example. It also gives us moments of genuine heroism and sacrifice from both Captain Reynolds (James Sives) and Sir Robert (Derek Ridell). Both are aware that they are about to die but both, in true stiff upper lip British style, will do their duty.

I'm not sure the karate monks quite work as they just seem a little out of place in the setting. It's not so much the Monks, nut the martial arts. Monks in full sinister mode make a fine addition to a creepy historical but when they start flying in red pyjamas it just looks...wrong. But that is a minor quibble if I'm honest.

I loved Pauline Collins's Queen Victoria. She's capable of defending herself and her honour both physically and verbally. Her - off-screen - dispatch of Father Angelo (Ian Hanmore) seems to have been triggered as much by his insult to her person as fear on her part. I also like the fact that her world view seems to find not just Werewolves but The Doctor: "blasphemous". Indeed, I had some sympathy with her telling the Doctor and Rose off at the end. People died. Lots of people and the Doctor and Rose seemed more interested the fun of it. And their attempts to get Queen Victoria to say, "We are not amused." I know fundamentally death in Doctor Who is something that gets skated over (generally) or used portentously to refer to the dangers of travelling with and getting caught up by The Doctor. I know this has to be done because it is 'just' an adventure story but when - for example - Rose stands and watches Captain Reynolds dying it seems ridiculous that her reaction is so minimal.

The danger with making the Rose - Doctor relationship so key to these tales is that it skews their reaction to what's happening and our reaction to them. Or my reaction. So, you get a scene where the Doctor and Rose get knighted by Queen Victoria in front of Sir Robert's GRIEVING WIDOW when they're all giggles and in-jokes, which doesn't feel quite right to me.

That's all rather harsh I suppose based on how enjoyable the whole story was. There was genuine fear and tension throughout. It felt sufficiently creepy to be one of those stories that puts a modern generation behind the sofa. The transformation of The Host (Tom Smith) into the Wolf was particularly well-done (and damned painful looking too). In fact the juxtaposition of the meal (with its civilised telling of tales and class distinctions) with the people trapped in the cellar watching The Host and waiting was impressively done, particularly as Rose tried to get information from it.

I still get the feeling that David Tennant is feeling his way with the part and trying to steer a course towards something properly Doctor-ish. There's a couple of moments in this where he's particularly effective: the look he gives Sir Robert when Sir Robert is about to go out and 'hold up' the Wolf and his scenes in the library.

Billie Piper is seamlessly up to her usual standards, including the lovely bad Scottish accent.

So overall I enjoyed that tremendously, caveats outlined above.

Next up 'School Reunion'.