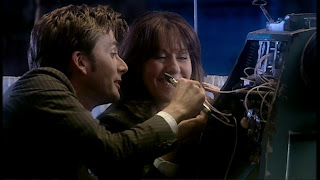 Our Doctor Who expert, Tony Cross, is journeying through all of time and space to bring us his thoughts on every available Doctor Episode. Today is the Tenth Doctor adventure School Reunion...

The basic tale is simple enough: nasty aliens have taken over a school and are using the children to help them break the McGuffin Paradigm, which will allow them to re-build the universe in their image. The Doctor and gang have infiltrated the school after Mickey got in touch (via Rose's mobile I assume).

The teams investigations get caught up with those of ace journalist, Sarah Jane Smith (Elisabeth Sladen [as if you need telling.]) Thus laying the foundations for some genuinely emotional scenes, some funny stuff and for Rose to get a glimpse - which she promptly ignores - of her potential future and some of the Doctor's commitment 'issues'.

The slight problem with this is that RTD has re-booted the Doctor and Sarah Jane's relationship to be more like that of the Doctor and Rose, which it never really felt like at the time. The Fourth Doctor and Sarah Jane were 'best friends' so the idea of Sarah Jane spending thirty years - or twenty-ish depending on your feelings about the UNIT dating controversy - mooning after the Doctor seems wrong. Sarah Jane was always a stronger character than that. Sarah Jane was a brave woman, a feminist (by Doctor Who standards) and a go getting, take no prisoners investigative reporter. Of course she would miss the Doctor and I'm sure the culture shock of a return to normal life after dashing around the universe would be horrendous but there's something not quite right about it.

However it is played beautifully, particularly the hairs on the back of the neck moment, when Sarah Jane sees the TARDIS, backs out of the room and we see the Doctor standing moodily behind her. It's a great moment and the following conversation is beautifully acted too.

And Sarah Jane gets the key speech at the end of the story: everything has its time, and everything ends. It's her role here to persuade the Doctor that what Mr Finch (Anthony Head) is offering isn't 'right'. In a way it’s an echo of her 'Do I Have That Right' debate with the Doctor in 'Genesis of the Daleks' and it is one of my favourite scenes in the story with all the Sladen, Tennant and Head all delivering performance wise.

Anthony Head makes a fine villain and Mr. Finch is another in a long line of nasty Head Masters. He gets a couple of good head-to-heads with the Doctor (and Sarah Jane). The swimming pool conversation is sharply written and nicely played. I think Tennant's line: "I'm so old now. I used to have so much mercy" reveals a side to this Doctor that we will see again and again. The Doctor that needs to be stopped. The Time Lord victorious.

Tennant's starting to look more comfortable in the role now. Showing real signs of Doctorishness and being able to flit between dark and light in a moment. He's not 'eccentric' or particularly 'alien' by Doctor standards (and always looks a bit uncomfortable trying to do the zany, which is good. He should be.) but he is recognisably growing in to the part.

This isn't one of Rose's best stories. Billie Piper is fine, but she's slightly side-lined by Sarah Jane and made to look rather pathetic and petulant: "I thought you were different" for heaven's sake. This is when you realise Rose is doomed because the only way for this relationship to end is badly. One way or another the Doctor's going to let her down.

It is nice to see Mickey Smith back and Noel Clarke seems a lot more up for it than previously. His realisation of his status: 'The Tin Dog' alongside his gradual acceptance by the Doctor is amusing. It's interesting that he asks to travel with the Doctor this time and the Doctor says yes. It's Rose who has issues with it, which is funny.

As is K9's return. All battered, rusty and broken he's restored to life by the Doctor and proceeds to behave magnificently. I always liked K9 (perhaps I was the right age when he first showed up: too young to be embarrassed by the childish addition of a cuddly robot to my adult series.) Nice to see him back.

Anyway to cut a longer review than intended short I loved this story and the 'My Sarah Jane' bit makes me cry every time. It made me cry before Elisabeth Sladen's untimely death. Now it seems even more heart breaking.

It's great. Enjoy it.