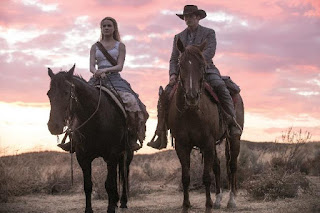 The BFI and HBO have announced that the finale of the second series of Westworld, directed by Frederick E.O. Toye, will have its World Premiere at BFI Southbank on Tuesday 19th June...

Westworld is a fully immersive Western themed experience where the “guests” can take their id on vacation to a world where there are no consequences for their actions. The show introduced viewers to an intellectually, emotionally and psychologically compelling new world. Season 2 continues to explore themes of Sci-Fi, AI, and what it means to be human as the “hosts” in the park find their free will awakened and begin to rise up against the guests.

Co-creators Jonathan Nolan and Lisa Joy will take part in a Q&A following a screening of the feature length episode.

Jonathan Nolan, co-creator of Westworld said “We’re honoured to share the world premiere of Westworld’s Season 2 finale with the BFI, an organisation that does such important work for film and television in the UK. We’re grateful that Westworld has been embraced by British audiences, and it feels good to be coming home to share this special moment.”

Gaylene Gould, BFI Head of Cinemas and Events added “It is such a privilege to be hosting the World Premiere of the season 2 finale of Westworld, a show which has captured the imagination of a global audience and generated worldwide cultural conversations about what it means to be human. The finale of the long awaited second season is going to be the very definition of a water cooler moment.”

Tickets to the event will go on sale to BFI Members on Tuesday 8 May, and to the public on Tuesday 15 May. Season 2 of Westworld is available on NOW TV and Sky Atlantic.