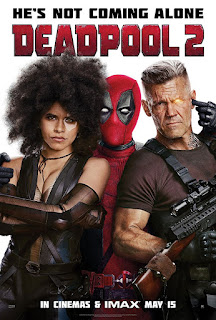 There are spoilers, SO MANY SPOILERS, dead ahead as Steve Taylor-Bryant fanboys about Deadpool 2...

Deadpool 2 had an expectation problem the minute it was announced. The first film worked so well because nobody knew what was going to happen, what direction it was going to take, but the most pleasing elements of that film, fourth wall/pop culture shots/studio digs, were going to be expected this time around, leaving an audience wondering what else they’re going to bring to the game? How are they going to find that fine balance between giving us more of the same and giving us something new? Does it work? Yes! A big pleasing yes that I’m not going to be able to talk about without MASSIVE excitable spoilers. So, here’s a picture from the Deadpool marketing team and if you’re still here after that expect spoilers... 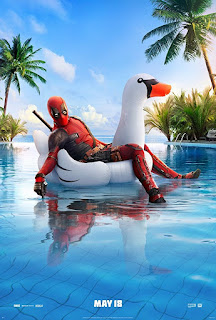 No, honestly I’m not kidding. I’m not going to potentially spoil a few moments of the film here if you haven’t seen it, I’m giving away the shop! I’ll give you one last chance to look away, thank you for your time and no hard feelings. If you’re still here after another picture you cannot hold me responsible for your annoyance at having EVERYTHING spoiled for you. 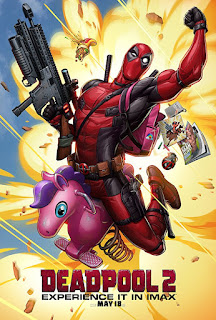 After internationally killing all the bad guys except one who cowardly hid in a safe room, Wade comes home to Vanessa for their anniversary, where aforementioned bad guy and his thugs invade the Wilson home and kill Vanessa. There you go, spoiler number 1. I warned you. This sends our beloved Deadpool into a tailspin of depression and it’s surprisingly Colossus that drags him out of it, taking him to the X-Men house and allowing him to become a trainee X-Man, cue usual beratement of studio for not financially springing for more characters, except they do. Briefly. But the self-absorbed anti-hero is too busy wallowing to spot them. That’s now two spoilers, you should have heeded the warning. As part of his first mission he stumbles across Russell who is using his fiery fists mutant power to go on a destructive spree due to being abused and tortured at the hands of the orphanage head. This leads to Deadpool taking the boy’s side, killing an orderly and ending up in prison with Russell without their superpowers due to a neck brace that suppresses the mutated genes. Meanwhile, in the future, Cable is sitting by the charred remains of his wife and child, he picks up the child’s damaged cuddly bear and uses his time travel wristwatch to go back to our present day to seek revenge and prevent his family’s deaths. Turns out Russell in the future is quite an evil dude. Deadpool is now suffering from his multiple cancers, with his ability to not die suppressed by the neck brace, and tells Russell he wants nothing to do with him, even as he’s fighting Cable who has invaded the prison. Russell befriends the biggest guy in the prison, a monster kept in the basement. Deadpool, now escaped, realises he should have done better by the boy and needs to stop Cable killing him. He can’t do it without help and so builds a team, the X-Force consisting of Shatterstar, Bedlam, Zeitgeist, The Vanisher, Domino and Peter. Their first mission together is to parachute from the sky onto a convoy containing Russell and other prisoners and save the day, despite a high wind warning. Before they manage one even remotely heroic act, The Vanisher gets electrocuted and OH MY GOD BRAD PITT IS IN A DEADPOOL MOVIE for about 1.6 seconds. Also killed off is Shatterstar, Zeitgeist, Bedlam, and poor old Peter. Yep, the full on X-Force from the trailer lasts less time than a cake in my house.

Interspersed throughout the film we see Wade entering what he thinks is heaven but not being allowed in by Vanessa because the time isn’t right, or he hasn’t proven himself worthy. After Deadpool and Domino fight Cable, and Russell and his new pal Juggernaut escape after Juggernaut pulls off Deadpool’s legs, Deadpool and what’s left of his team, Blind Al, Dopinda, Domino, and Weasel are recuperating. What follows is one of the most uncomfortable scenes ever made for a cinema release. Cable arrives to explain his actions and ask for help. Deadpool is sat on the couch and, well, remember in the first one where he loses his hand and then you see him with a childlike hand as it grows back? Yep. We have Ryan Reynolds with children’s legs and no underwear on giving Cable the Basic Instinct treatment. Honestly, I guffawed with laughter more to stop myself vomiting. They agree to help Cable stop Russell but Cable has to give Deadpool a chance to change the lad’s future. He’s given 30 seconds. Russell doesn’t bite at the hand of opportunity and just wants to destroy the orphanage and kill the warden. As Cable tries to shoot him, Deadpool, who is now selflessly wearing the neck brace again to appeal to Russell’s better nature, jumps in front of the bullet. It works as Russell sees that Deadpool is actually his friend, and Cable’s future is changed. Deadpool then embarks on a death scene that makes David Tennant’s end in Doctor Who seem short. Cable uses the last of his time power to go back a few minutes and put Wade’s anniversary present to Vanessa, a lead Skeeball token, into his costume without him noticing therefore the bullet doesn’t kill him, Russell goes off with Negasonic Teenage Warhead and her girlfriend Yukio to Xavier’s mansion, leaving a new X-Force family to be created, consisting of the now stuck in our time Cable, Domino, Deadpool, Colossus, and the unnervingly bloodthirsty Dopinda. Cue end credits. Cue brilliance of a scene where Deadpool gets Negasonic to fix Cable’s timewatch so he can save Vanessa, correct the Marvel timeline by meeting Wolverine and killing the Origins Deadpool, and then sneak up behind a young Ryan Reynolds who has just happily read a script named Green Lantern and shooting him in the head.

Deadpool delivers everything you want. The bad language is upped, the shots at studios and pop culture are increased and funnier, and the action and CGI is so much more “big screen blockbuster” than “risky film that might not work.” Whilst the studio that killed Wolverine have obviously invested more money into the budget, Deadpool 2 still keeps that ‘little film that can’ attitude and feel which is incredibly pleasing. The budget is nearly all spent on wonderful cameos that bring the biggest shocks and surprises and with tightening up the editing, which is a lot better and doesn’t leave room for so much padding this time around. It’s still an anti-superhero film but has the professional slick of a franchise that’s deemed important. It’s a proper film rather than an experiment.

Ryan Reynolds is at his funniest, the script is full of heart and great storytelling along with amped up humour and action and, when they have to use a blockbuster type trope to make something work, you get a fourth wall comment about lazy writing which immediately allows you to forgive them, and the casting is spot on. Josh Brolin as Cable brings some menace and gravitas but also surprises with how good his comedic timing is, he and Reynolds just seem to work naturally as a double act. The returning cast, TJ Miller, Brianna Hildebrand, Morena Baccarin, Leslie Ugamms, Stefan Kapicic, and Karan Soni are all as impressive as last time, and Julian Dennison as Russell is highly watchable. It’s Zazie Beetz as Domino though that just slightly gets the award for best performance, and I left the cinema hoping for a Domino spin off film within this universe and I never want spin offs!

Deadpool 2 is Deadpool turned up to 11. It’s a cast and crew having so much fun and burning through the studio’s money, it’s Ryan Reynolds being Ryan Reynolds but with some celebrity pals. It’s the movie that exceeds expectations that are higher this time. It’s perfect.