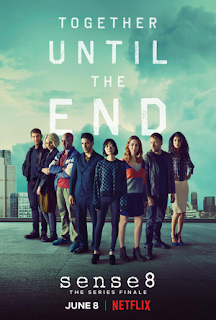 Nearly a year after the cancellation of the Netflix original series from the minds of the Wachowskis and J. Michael Straczynski was announced, Sense8 gets a two-hour long finale to wrap up storylines. Watch the full trailer...


Sense8 is one of those sci-fi shows that "you don't know what you've got til it's gone." The series synopsis was that eight strangers around the globe find themselves connected — first by a violent vision, then by their shared ability to connect with one another’s thoughts and actions, and finally by the urgent need to find out what happened and why. The strangers, known as Sensates, are Capheus (Toby Onwumere), Kala (Tina Desai), Lito (Miguel Angel Silvestre), Nomi (Jamie Clayton), Riley (Tuppence Middleton) , Sun (Donna Bae), Will (Brian J. Smith) and Wolfgang (Max Riemelt)
and their need to know goes beyond simple curiosity — as they pursue answers, a mysterious organization hunts them down, intent on destroying them.

With an original plan for five seasons, the creators of The Matrix and Babylon 5 teaming up and a cast that also featured names such as Daryl Hannah, Naveen Andrews and Freema Agyemon, it should have been a far bigger hit than it was, but the numbers just didn't stack up and Netflix announced its cancellation in June last year after just 2 seasons.

The media outcry from fans was immediate, and loud, but it wasn't enough to save the show from the axe. It was, however, enough to get this wrap-up finale made, as announced by Lana Wachowski


And that's what we're getting now as this, their final mission, sees seven of the Sensates out to save the 8th after the season 2 cliffhanger ending.

"Together until the end. From our cluster to yours," says the marketing. The Sense8 Series Finale is directed by Lana Wachowski herself and comes to Netflix on June 8th. Watch the trailer. And yes, that is Sylvester McCoy a minute or so in...