Film - Film Fest in the City 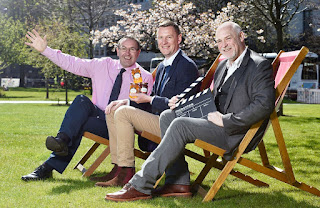 Film Fest in the City with Mackays, is set to return to St Andrew Square Garden in Edinburgh this summer, with the Festival announcing a jam-packed line-up of free screenings from Friday 15th to Sunday 17th June...

Family favourites such as Paddington, Paddington 2, The Incredibles, Jason and the Argonauts and Who Framed Roger Rabbit? will also feature, alongside The Greatest Showman and Moulin Rouge!

Once again, all of this year’s screenings will be free with no ticket required, just turn up and join in. Headline sponsors Mackays will be serving up complimentary Dundee Marmalade sandwiches for all at Paddington screenings, alongside a Paddington fancy dress competition and savoury and sweet hampers featuring a range of their authentic jams, marmalades and chutneys.

Mark Adams, EIFF Artistic Director said: “Our annual selection of free screenings are always the perfect way to get in the movie mood in the weekend before the Film Festival begins. From Casablanca to The Greatest Showman, this is a selection of great films that will appeal to film fans young and old.”

Roddy Smith, Chief Executive of Essential Edinburgh commented: “Film Fest in the City is only possible thanks to the superb partnership between Essential Edinburgh, EIFF and the production team at Unique Events. Essential Edinburgh is solely funded by city centre businesses who invest £1 million a year into projects, initiatives and events, such as Film Fest in the City. As always it is a fantastic mix of movies that can be enjoyed for free in the beautiful St Andrew Square Garden, and this year we are delighted to welcome Mackays as our headline sponsor – I for one can’t wait to have marmalade sandwiches!”

Martin Grant, Managing Director of Mackays said: “As Scotland’s most loved jam and marmalade maker, we’re thrilled to be bringing a Mackays moment to Film Fest in City and can’t wait for cinemagoers to enjoy a taste of our sweet and savoury preserves under the big screen. It’s no secret, we at Mackays have a soft spot for Paddington and there really is no better pairing for the films than a Dundee Marmalade sandwich!”

Launched in 2011, the St Andrew Square screenings were created to bring film lovers into the city centre, to celebrate the capital’s rich culture and creativity and generate excitement during the run-up to the world-famous EIFF.

See the full programme of screenings below