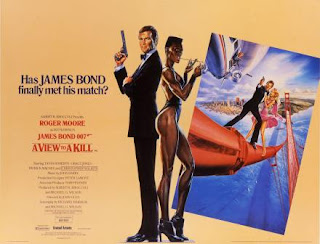 It's May Day. Any excuse, however tenuous, for a reminder of Barnaby Eaton-Jones thoughts from a few years ago on A View To A Kill (Grace Jones? ... May Day? ... get it? Oh never mind)...

“I’m always happiest in the saddle”


I was 12 when A View To A Kill premiered at the cinema. It was one of the first movies I actively recall being taken to see and, as such, it’s lingered with me nostalgically for many years. Even now, at 41 years of age, with a visible middle-age spread, man boobs, a chin-beard and looking like a cross between Vic Reeves and Jonathan Ross, my subconscious still harbours the unrealistic ambition that I could still play James Bond. Of course, Roger Moore was 16 years older than I am now when he donned the tuxedo for the last time, and his subconscious must have harboured the unrealistic ambition that he could still play James Bond too. Ahem.

So, let’s ditch the rose-tinted spectacles and I’ll take another look at A View To A Kill. 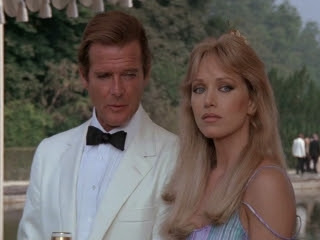 Let’s get the obvious out of the way first. Roger Moore is too old. He admitted it a few films previously but he just about gets away with it because of his charm and his still good looks. He certainly doesn’t look like a 57-year old man and, because he’d lost weight for this last film, he actually looks fitter and more energetic than he had since The Spy Who Loved Me. But, if you’re going to surround him with a young and athletic cast, you’re going to make him look his age. Pairing him, for a good chunk of the film, with an aged Patrick Macnee (who played John Steed in The Avengers), as Sir Godfrey Tibbett, makes a huge part of the film appear to be some sort of spy version of Grumpy Old Men – they’re easy relationship really adds something special to the film and it’s a real shame when Sir Godfrey ends up the way of every Bond ally does in order to give Bond more ire to despatch his latest nemesis. Casting Maud Adams in Octopussy, as an older love interest and main ‘villain’, gave Moore’s penultimate film a believable attraction between 007 and the leading lady. Even the other main cast members were middle-aged, which meant that Octopussy – however silly and over-the-top it seems – didn’t make 007 look as antiquated. Casting ex-Charlie’s Angels star Tanya Roberts in A View To A Kill, as Stacey Sutton (the granddaughter of an oil tycoon that the main villain has duped), was probably one of the worst decisions the production team could have made. Not only has the role got no character, charisma or charm, but Roger Moore admitted himself that the real-life mother of the actress was younger than him and so he vetoed many of the more amorous scenes between them (until one rather chaste shower scene appears at the very end of the film). She’s gorgeous to look at and I’m sure my 12-year old self had naughty stirrings watching her but she’s just not used properly. I’m sure my 12-year old self wouldn’t have known how to use her properly either, but I digress.

A View To A Kill tries to come up with a more modern and era-centric plot, much like Live And Let Die did for the very first Roger Moore outing. This time, as it’s the brash 1980s, we’re talking computers. More specifically, the Silicon Valley; which Max Zorin, a wealthy industrialist, plans to destroy with a man-made earthquake to gain monopoly in the microchip market. Zorin is no Bill Gates. He’s the product of a Nazi experiment, all blonde hair, blue eyes and psychotic nature. Who better to portray that than the off-kilter and forever watchable Christopher Walken?! It seems that David Bowie and Sting were both asked before Walken, both of them big-time musicians who, shall we say, are better at their day job. So, thank goodness they turned it down. Walken brings a strange charm and mad menace to proceedings; so much so that it is a real shame he dies in the final dénouement instead of leading his group of investors into more hair-brained schemes as a modern-day Blofeld. Surely, even a spin-off would have been possible, with his sadistic tendencies and delight in violence brought to the fore. Fifty Shades Of Zorin would have been a huge hit. 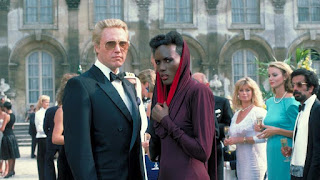 Of course, pairing Walken with the equally off-kilter Grace Jones as his lover and chief aide, May Day, was pure genius. They do look like they’ll either kill each other or make love to each other whenever they’re together. Her mad-eyed technique of physical acting is initially off-putting and, when she goes to bed with 007 (on the orders of Zorin), you wonder if Roger Moore will withstand the rigours of this particular workout and, as he’s doubled by stuntmen for probably 50% of the film, you wonder whether initially requested a stunt double for this scene too! Moore admitted in his autobiography that he didn’t get on with Grace Jones and you wonder if this goes the same for his relationship with Walken too. Whether it’s real or imagined on my part, there’s a real frisson when the trio are exchanging dialogue. Moore brings some steel and weight behind his threats and Walken and Jones are just gloriously unhinged.

The regulars are all on hand, and given a rare trip outside the office (to the horse racing at Ascot), which gives them a little more to do than usual. It’s always nice to see M, Q and Miss Moneypenny escape the confines of their regular scenes and imbued with a few more lines of dialogue and character moments. It was Lois Maxwell’s last movie as Miss Moneypenny, as she respectfully retired when Roger Moore bowed out; which makes sense as she would have come across as a more matronly figure when Timothy Dalton took over the lead role. She was always perfect as Miss Moneypenny and it’s to her credit (and due to her morals!) that she chose that role over Sylvia Trench; 007’s supposed long-term bedroom buddy (to put it politely), who only appeared in Dr. No and From Russia With Love before vanishing completely.

From the plotline of drugged horses at Ascot, England, we then move to San Francisco and the desire of Zorin’s to eliminate all competition in the microchip field. Throughout this, the ‘father figure’ of Doctor Carl Mortner (played as a terrible German caricature by Willoughby Gray) experiments with his drugs on his adopted son Zorin and May Day, as only a lone mad ex-Nazi scientist can.

About two thirds of the way through the movie, we learn that Zorin was working for the KGB until, when he thinks he’s assassinated James Bond, the KGB disagree with his methods and he essentially flounces off in a sulk about it. This leads on to a small sequence where KGB agent Pola Ivanova attempts to spy on Zorin’s activities, at the same time as 007, and leads the two of them into a passionate reunion that ends with 007 deceiving her once more (their first meeting is, obviously, only alluded to in the dialogue). Fiona Fullerton brings the beauty, danger and acting prowess to give Pola’s short story arc one of genuine interest and it’s a real shame they didn’t stick with her for the rest of the movie as she would have been a much more interesting leading lady, in the mould of the forced collaboration with Anya Amasova in The Spy Who Loved Me, than seeing Stacey Sutton return for the final third of the film. 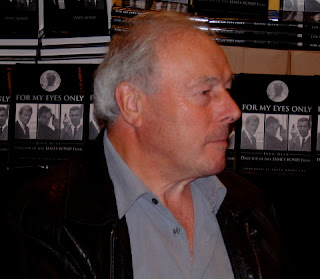 John Glen sits in the Director chair once again and you begin to wonder whether hiring someone different would have given an extra edge to the film. He doesn’t direct badly but he does seem a bit too much by-the-numbers. Obviously, with the Bond movies, there’s a structure to stick to and, because he does it well, then he’s rewarded by the offer of the next film in the franchise. His big failing here is not masking the stuntmen doubling for Roger Moore. Virtually every shot involving a stunt double shows his face, which blatantly gives away the fact that it isn’t Roger Moore doing the difficult stuff. The worst offender is the car chase through Paris, where 007 commandeers an off-duty taxi. The chase itself is rather good, with some fantastic stunt work, but the joke of the car getting smaller and smaller with each obstacle it tries to avoid (finally ending up with just the front bonnet and two front seats being driven to a standstill) is a really bad one to make when it requires full view of 007 as the driver in a car that exposes the driver more and more. There are bad wigs and different faces a-plenty in many of the shots, which is either really careless directing and/or editing, or it’s just a lazy way of underestimating the intelligence of your returning audience.

John Barry’s score is, as always, a perfect fit for the film. Like any good composer, he knows where and when to put music and how to enhance a scene when doing so. The title song, by Duran Duran, is pure ‘80s pop and – for me – it’s a brilliant new direction and brings the Bond films back up to date to match the more modern style of plot. Of course, this also means it sounds out of date pretty quickly too, but I have a fondness for it that my 12-year old self would be ashamed of (he was a Curiosity Killed The Cat fan).

The final act of the film is the one that so disturbed Roger Moore, due to the over-reliance on violence when, for example, Zorin machine-guns down hordes of workers in his mine (the amount and the graphic nature of it, to be fair, isn’t really anything that would have troubled my 12-year old self and he was quite a sensitive soul). Moore is quoted as saying it isn’t really what Bond is about. More objectively, it isn’t what his Bond is about. And perhaps that’s why the film is constantly given the title of the worst Bond movie of the franchise – the Bond in the middle of it all doesn’t seem to fit what surrounds him. Maybe if Timothy Dalton had been bought in for this, instead of beginning with The Living Daylights, then it would be considered a better film. Because, for a film that is essentially a remake of Goldfinger, it isn’t a bad movie at all. There’s the whole sequence with Stacey Sutton driving a San Francisco Fire Truck and 007 hanging off the extended ladder that could have been cut, and thereby cutting a fair chunk of Stacey’s screen time too, as it seems too slapstick and relies way too much on back-projection to try and convince the audience that Moore was hanging on at high speed for dear life. Aside from that, A View To A Kill fits together well and entertains as much as any other Moore movie, especially delivering a fantastic finale with the two main protagonists battling it out on top of the Golden Gate Bridge, dwarfed by a massive airship, before Zorin’s eventual fall.

All in all, my 12-year old self loved it and thought Roger Moore was the bee’s knees. So, maybe you need to watch it with uncritical eyes and just enjoy it for what it is, the final bow of Roger Moore’s reign as James Bond, 007. After all, if you’ve been Rogered seven times in a row, you might be in need of a rest afterwards.