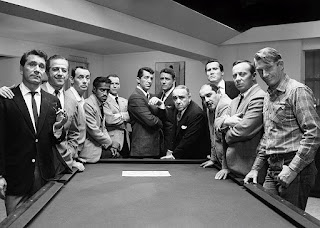 Steve Taylor-Bryant has Ocean's of fun looking back over the soon-to-be rebooted film franchise...

It’s not very often I get truly excited about a film. I look forward to certain releases every year, but as events go, cinema-going is not really my thing any more, the pricing of films is killing cinema for my family and me, so I have to save up and really, really want to see something for my excitement levels to explode. Besides, the films I get myself up for tend to not be family events any more. The family wanted to all see Infinity War, which would have cost me over £100 for everyone, so that didn’t happen; nobody in my family wants to see any DC films though, so I can get excited for Aquaman knowing that that is an affordable slice of pop culture. One film in particular though has me saving my pennies and really excited for a trip to my local multiplex like no other on this year’s slate of releases… that’s right, it's Ocean’s 8. No, you heard me correctly, and when you stop laughing I’ll explain why…

The guy at the back is still giggling… yes, you sir…

Okay, I suppose smirking is acceptable but DO IT QUIETLY.

I love the Ocean’s films. The original film with Sinatra et al [yes that's them in the picture at the top - Ed] is a great little slice of fun, not to be taken seriously of course and certainly not Sinatra’s best-ever performance on screen, but it’s great. You should watch it. Then we come to the trilogy of Steven Soderbergh films, hereafter known as just 11, 12 and 13, which were exactly what I needed at the time in my life that each was released. 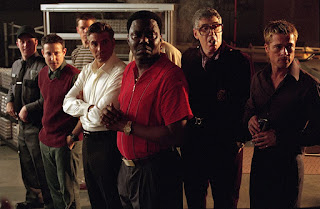 I love a great caper movie, I like heist films, although not many are particularly great pieces of cinema, and I love when the world’s biggest stars team up for something that is neither a John Hughes movie nor a superhero flick, and 11 did that perfectly. There was a fantastic balance amongst the cast, just like the crew had to be for the actual job. The plot was also complex enough to work as a heist film, but simple enough that even a layman could follow what was going on. George Clooney, here in the Sinatra role made famous some forty odd years previously, is as perfectly cast as he ever has been. He plays charming like nobody else, he oozes the stuff and 11 plays up to those strengths, allowing him to take the lead role in a very crowded cast of exceptional talent, and still be the shining light. He is witty, he has the looks of a man who would rob a casino, and did I mention how charming he was? With his fixer partner, Brad Pitt’s Rusty Ryan, by his side they build a team to rob three casinos owned by the dastardly villain of the piece, Terry Benedict (beautifully portrayed by the always marvellous Andy Garcia). Each member of the team has to bring something to the project, whether it be acting skills, technical expertise, or just the ability to defraud and act, everyone has a role to play and everyone cast in a role is picked perfectly. Matt Damon as up and coming criminal Linus Caldwell is both funny and almost cringeworthy in his panicking and inability to see the bigger picture, Bernie Mac as Frank Catton is glorious, Elliot Gould needs monuments built for him anyway for his entire career but his role of Reuben Tishkoff has to be up there with some of his best, the same can be said for Carl Reiner as Saul Bloom. It’s not often that the elder statesmen of Hollywood get such big and crucial parts in films like this and it is hats off to those gentlemen for proving everyone else in filmland wrong. Shaobo Qin as Yen, with the fact he is actually an acrobat and doesn’t need to be an actor is great, Eddie Jemison as Livingston Dell is another great casting pick, as is the brotherly duo of Scott Caan as Turk Malloy and Casey Affleck as his sibling Virgil. The arguments and pettiness they get up to is highly funny and adds something to characters that may have been nothing more than ‘other guys’ in anyone else’s hands. Rounding out the team is Don Cheadle as Basher Tarr, who is vital to all three films despite Cheadle’s woeful British accent being the only weakness of the films. The way the plots twist and turn, then the heist happens, then the explanation segments show what really happened are brilliantly done throughout. 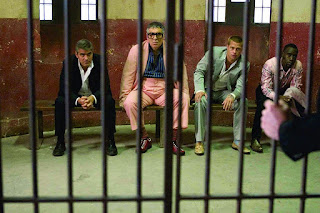 After 11 we move to Europe with 12, which gets a lot more hate than it deserves, and we see Benedict trying to exact his revenge on the crew that includes Ocean’s wife for the second time, Tess, portrayed by Julia Roberts, and a new baddy they must overcome if they are to succeed in the mysterious cat burglar known as The Night Fox, or Baron Francois Toulour, who seeks to destroy and one up Ocean at every turn. They are also being chased across the continent by EuroPol officer Isabel Lahiri, Catherine Zeta Jones in a role I actually like her in, who is the law enforcement ex of Rusty. After getting back Benedict’s money and beating Toulour, they set their sites on helping a now ill Reuben who has fallen on hard times. 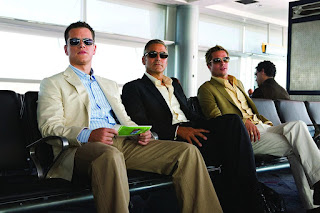 This brings us back to Vegas. Probably the reason nobody loved 12 was the lack of casino robbery as everyone wants to see the house lose and, in 13, that house is owned and run by the unscrupulous Willy Bank which allows the legendary Al Pacino to chew more scenery than he usually does and firmly gets the audience against him. He’s actually more dislikeable than Benedict, which says something about Pacino’s performance. Eddie Izzard’s Roman Nagel gets a bigger role this time out, and Ellen Barkin as Abigail Sponder, Bank’s executive assistant, adds a level of glamour and humour to the proceedings. Inevitably it is another win for Ocean and the gang, and another snub for Toulour, and that was that, three brilliant films, that were perfect in every way except Cheadle’s accent. Which left a hole in my life, I wanted more. The Ocean’s films were clever enough, without being inaccessible, and they were far more entertaining than many other things that were released before or since, but alas nothing was forthcoming. 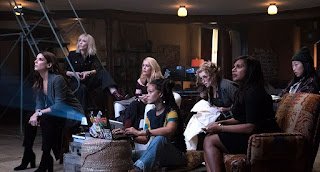 We now have a sequel/reboot/tribute/homage in the form of an all-female Ocean’s movie. Ocean’s 8 looks great! It looks as funny as the other four films and it certainly looks well cast, Bullock, Blanchett, Hathaway, Fanning, Bonham Carter, Munn, Paulson to name just a few of the wonderful actresses in the cast list. It’s not Soderbergh, which is the only thing that has me slightly worried, but since it’s written and directed by Gary Ross who gave us Big, Seabiscuit, Pleasantville and Dave, my concern is not massive. Just as Clooney and his crew of global stars reignited the magic that Sinatra and his pals had started, so now it’s Sandra Bullock’s time, her turn to build a legacy of thieves that entertain as they steal. I have so much affection for all four of the Ocean’s films that have come before, so my levels of excitement for a fifth is rightly high.

[Say you're laughing at the trailer instead - Ed]