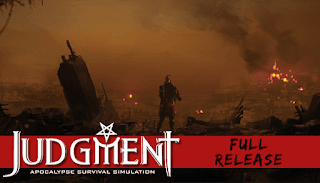 The Defective Inspector sits in judgement over Judgment: Apocalypse Survival Simulation from Suncrash...

I’m getting old. Titles I remember during early funding stages and Greenlit through Steam are becoming fully fledged games. One such game, Judgment: Apocalypse Survival Simulation, proudly announced its V1.0 release and I rushed to try the game out in it’s theoretically finished state. With my grubby hands clasping onto a new shiny thing to play with I rush in with little to no regard for my personal sanity.


Judgment: Apocalypse Survival Simulation is one of many apocalypse games but unlike most it’s not about zombies or nuclear winters, this time it is all about the occult. For reasons I’ve yet to uncover the world has been overwhelmed with demons from the underworld and they seem hell bent to relocate their population on a new plane. The creators of the websites openly admit they have taken inspirations from XCOM (old and new) as well as the critically acclaimed and ironically still early access title RimWorld. Merging these two dynamics together was always bound to produce something interesting and infuriating in equal measure. Both XCOM and RimWorld are notorious for their random number generator logistics and Judgment follows the pattern.

You arrive in randomly generated terrain with three randomly generated civilians placed in the middle of a randomly generated map. I’m going to forego the word random from now on as it is somewhat implied in most avenues of Judgement. Guided by a fairly generous tutorial you are able to setup research stations, food tables, bedding and shelter to last over the coming days. You’re even given a quick and easy fight to make the prospect of invading demons less horrifying. You’re also introduced to the RimWorld like world map which can be used to scavenge for resources from demon filled landmarks. You even get to free a caged survivor from some imps to bolster your forces. Up to this point Judgment seems pretty much like most scavenge/survival games and while it does so admirably it’s far from unique. The truth is what makes Judgment a great standalone game emerges over time.


First of all your survivors are trained in a similar fashion to Dungeon Keeper or an RPG. With each task they complete or demon they slay your little survivors will grow and develop new skills and you have the pleasure of choosing those skills. Furthermore the initial traits granted at the start define particular skills and abilities, for example someone who is a Priest can later obtain the ability to bury the dead accordingly or a Witch is able to wield rare occult weapons found through hard earned search or purchase. This tactical development was a welcomed balanced to the sheer amount of randomisation forced upon me as I felt able to control the game, but that didn’t make it any easier. Oh no! So far I have tried a total of 5 times to get somewhere in the game only to fumble after 15 or so game days. I’ll be Twitching/Let’s Playing soon enough but for the moment take my word, it’s not exactly easy going.


Another quirky feature is access to the Occult. Again akin to Dungeon Keeper you get to access some of the darker sides of the world and use it against your demonic foes. First you must research the Occult via a completely different technology tree to unlock charms, skills and even rituals. Actually using any of this required you fight the horde and pluck resources from their corpse(s). I’ve only touched my toe into the pool of dark magic but I have enjoyed what I’ve seen so far. There is something sadistically pleasing about killing your enemy with their own dagger.

The final feature I want to highlight is without a doubt my favourite, the awareness meter. Ultimately your little colony will grow and expand to defend itself against the oncoming storm. Unsurprisingly this gets noticed by everyone around you and thus your actions both inside and outside the base dramatically change the frequency of attacks and even their strength. Theoretically you can control how p*ssed off the demons get and so with clever work, careful preparation and a little bit of luck you can limit not only the effects of your enemy but also their potency. Most games of this type leave it completely to chance, instilling an unchanging and unforgiving difficulty curve you have almost no control over. While I am certain it is impossible to prevent demonic invasions even having an influence over the number gods made me feel like I was strategizing rather than enduring.


I do however consider myself a fair reviewer and no title is without sin, especially one so heavily influenced by it. The truth is Judgment has a few flaws I find frustrating or disappointing. The graphics and general flow of gameplay are dated, even for Indie standard games. It reminded me of a polished RuneScape from the old days and that is not a compliment. I also found the music to be too invasive, occasionally overstating events rather than foreshadowing or complimenting the situation. The greatest sin is the key mapping and GUI, it’s not to say it’s unusable but everything felt a little alien for the first hour of gameplay. Most games like this have hotkeys for cutting, mining etc and instinctively I kept clicking the non-keypad 1,2,3 to increase/decrease speed of the game only to discover my survivors, of all things, were linked to these buttons. I know it seems picky but I felt that a large amount of the interaction was not created with existing titles in mind.

That all being said, I am rather pleased with the game. Sure there are some issues but these kind of problems are relatively common to new indie companies, even with an impressive staff. Despite the cracks in the armour I still find Judgment provides me with a strong premise, sturdy gameplay and unbreakably interesting features. When demons comes to take me into the underworld I feel I’ll be suitably prepared for what is to come.

Images from Humble Bundle
Email ThisBlogThis!Share to TwitterShare to Facebook