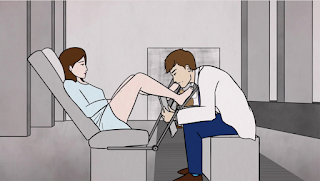 Susan Omand finds a sensitive documentary on a delicate subject as she watched the short animation Tightly Wound...

A woman recounts her experience living with chronic pelvic pain – how health professionals have failed her, men have rejected her, and shame, anger, and hatred have plagued her body.

I’ll be honest, I was in two minds about reviewing this short animation by Shelby Hadden. Usually I can look at a synopsis or a press release and think “yes, happy to cover that” or “nope, not really our thing” and that’s the decision made. This one had me dithering and second-guessing myself. I mean “problems down there” is not a subject that many are comfortable talking about, far less reading about at the breakfast table or on the bus, but it looked like an interesting idea and I was keen to see how a thorny topic like this would be presented in a way that didn’t make it feel like either an angry rant against an unfair world or like an academic programme, like Living and Growing was at school (although I may be showing my age with that reference). I talked it over with a close and trusted friend and got back the question “If it was about mental health or lung cancer would we be having this discussion?” No. We wouldn’t.

And that, I think, is why it IS important that this documentary even exists. Something needs to be done to break the taboos of talking frankly about intimate but unsexy medical issues that currently, if they are mentioned at all, are usually spoken of in hushed tones and veiled in euphemism. So I gave it a watch.

And it was interesting. Spoken as a first-person account by the film-maker Shelby Hadden herself, it didn’t feel overly subjective or as opinionated and ranty as I had feared from the synopsis. Nor was it dry and scholarly, as it didn’t use much technical jargon or medical terminology so it was easy to understand without being patronising. The facts and problems, both physical and mental, of her illness were presented fairly and objectively, leaving it up to the viewer to form their own opinions. The animation by Sebastián Bisbal was really well done too. To be honest, the characters reminded me a lot of the Daria cartoons but without the sarcasm, although there was still humour drawn into some of the explanations. Not overly emotive, nor overtly graphic, the animation balanced the tone of the narrative, making the whole thing comfortable, informative and, yes, entertaining, as it made light fun of some of the suggestions and situations that Shelby had to put up with, like the conveyor belt of doctors, while remaining sensitive and non-judgemental to her personal feelings. And the selective use of PoV in the animation, seeing the therapist’s office as if we were the person lying on the surgical bed staring at the diploma on the wall through our knees, really helped to personalise the experience, as we’ve all been there at some point.

I think the main difficulty with this documentary is going to be the problem I had with it initially, getting a general audience to step outside their own comfort zone enough to actually watch it in the first place. But it’s a step that is very much to be encouraged, because it would be a shame for such an informative piece of work not to make a difference.