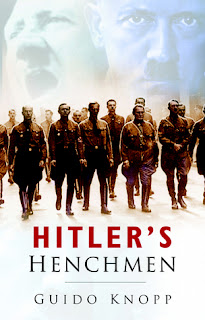 In this week's War Report, Tony Cross crosses enemy lines to delve behind the scenes of of the Nazi Party and reads Hitler's Henchmen by Guido Knopp...

Following interviews with contemporaries and eyewitnesses, relatives and friends, and access to documents and archives, the author offers an intimate view of what went on behind the scenes in the Third Reich. He re-examines the lives of Goebbels, Goering, Himmler, Hess, Speer and Donitz, tracing their relationships with Hitler and with Nazism. These very different people shared an awestruck dedication to Hitler and a deep hatred of the Jews. Through diaries and the first-hand observations of those around them, their personalities are brought to life and their actions, to some extent, explained.

This is a good introduction to some of the senior Nazis: Goebbels, Goring, Himmler, Hess, Speer and Donitz. (Yes, I'm aware there should be some umlauts there but I can't work out how to do them on my keyboard.)

Each person's chapter deals with their background, how and why they got involved with the Hitler and the Nazis, what they were involved with, what they knew - or claimed they didn't know - and their ends. Reading this you can only conclude that both Speer and Donitz got off lightly. Speer doing a good job of shifting the blame for a lot of ugly things on Fritz Saukel. Speer escaped execution at Nuremberg, Saukel didn't and I'm pretty sure that was because Speer was a much smoother, posher character than Saukel as opposed to their crimes. Knopp does a good job of pricking both Speer and Donitz's claims and denials.

This book does a good job of showing how Hitler's personal 'charm' could drag these men in and hook them firmly to him even as the obviously catastrophic nature of his rule became obvious. And showing that they were - Himmler and Hess's odd interests aside - normal men who were convinced to commit extraordinary crimes.

This is a good introduction to these men. There are more in-depth accounts of their lives. Speer and Donitz got to write their own post-war. It also doesn't particularly go into depth about how these men all worked together and with Hitler.

Oh and Guido Knopp is a German historian. Daily Telegraph writers who claim that the Germans don't like us going on about World War Two because it reminds them of their shameful past would do well to read this to avoid further stupidity.