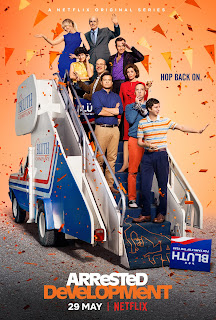 It's back! After five years away (unless you count the remix of Season 4 currently running) Season 5 of Arrested Development hits Netflix on 29th May. Watch the trailer...

Yes the Bluths are back and this time they are all together. Whether they like it or not.

“In talks with Netflix we all felt that stories about a narcissistic, erratically behaving family in the building business -- and their desperate abuses of power -- are really underrepresented on TV these days,” said series creator Mitchell Hurwitz at the time the new season was announced. He added, “I am so grateful to them and to 20th TV for making this dream of mine come true in bringing the Bluths, George Sr., Lucille and the kids; Michael, Ivanka, Don Jr., Eric, George-Michael, and who am I forgetting, oh Tiffany. Did I say Tiffany? — back to the glorious stream of life.”

And, yes, Season 4's Remix is currently already on Netflix, re-cut so that the events from all the single person episodes from the original Season 4's experiment come together in chronological order, just "as a comedic experiment to see if new jokes and a new perspective would emerge from a remix that features all the Bluths in every episode" according to Mitch.


But without further ado, and with exec producer Ron Howard "warming up my uncredited narrator vocal cords," here's the trailer for the ALL NEW Season 5