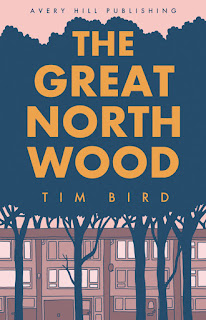 Susan Omand goes for a wander through Tim Bird's upcoming comic The Great North Wood thanks to Avery Hill Publishing...

Long ago the whole of Southern England was covered in forest. Over time, this woodland has been gradually cut back, but small patches remain amidst the suburban sprawl of South-East London. A few ancient oaks still stand in gaps between housing estates, alongside railway lines and acting as boundary markers on roundabouts.

The magic that once filled the ancient forest can still be felt even when the trees are long gone. Memories of the Great North Wood are recorded in the place names - Forest Hill, Honour Oak, Norwood. Stories are told of the bandits, outlaws and gypsies that once roamed the forest, and their presence can sometimes be sensed when the hum of the city is quiet. 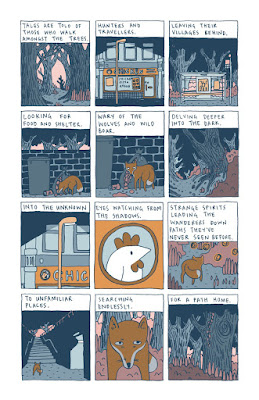 I don’t know my way around London’s geography, never mind its psychogeography, so it was neither a burning need to read the story nor a familiarity with the place names that drew me to read The Great North Wood by Tim Bird. Instead, it was a fox. More specifically it was the drawing of a fox eating chicken takeout from a discarded cardboard box on a street corner, as the artwork of the first page of the comic caught my attention. So I followed the fox as he wandered the London streets and got led back in time to the history, myths and legends of the ancient forest that used to cover an area from Southwark to Croydon and Lambeth to Lewisham, according to the map at the start of the comic (you always know you’re in for a good saga when a book or comic starts with a map).

And the map, for me, was important as the comic goes on to tell the stories of various places whose names and origins can be traced back to the ancient woodland. Even though I didn’t know these places, I really enjoyed the stories, all of which are wonderfully descriptive. There are stories of murders, mystics and mythical beasts. They tell tales that span the centuries, from the knighted oak to the Crystal Palace and from secret war rooms to secret meetings until the forest takes over again. Tim Bird can tell a story very well and I was hooked from start to finish. By the end I felt that I had learned a lot as well as being thoroughly entertained by the folk tales of the area. 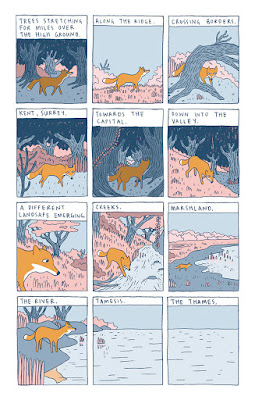 But as I say, it was the art that really caught my attention. With a palette of pinky/oranges and blue/greys, it reflects the colours of a lamp-lit city rather than the greens that you would expect from a story about trees but this works incredibly well and is beautiful. The naïve-art style of the drawing, also by Tim Bird, also enhances the magical fairy-tale narrative and there are lovely touches with the gods, ghosts and fantastical beasts that the fox encounters on his trip through the trees before he witnesses the evolution of the villages that became towns and then joined together to become the city of London.

Tim Bird's 'The Great North Wood' is released by Avery Hill Publishing at the East London Comic Art Festival on the 23rd of June.