Book - The Gestapo: The Myth and Reality of Hitler's Secret Police 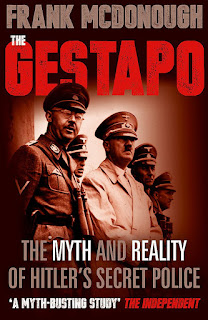 Ever-conscious of current affairs, Steve Taylor-Bryant takes a turn at delving into WWII history to read The Gestapo: The Myth and Reality of Hitler's Secret Police by Frank McDonough...

Written with access to previously unpublished records, this is the fullest and most definitive account available on Hitler's secret police, the Gestapo. The book illustrates how, despite its material constraints, this group was able to extend its reach widely and quickly by manipulating and colluding with the general public during World War II, making ordinary German citizens complicit in the rendition of their associates, friends, colleagues, and neighbors. Though it was a powerful institution, it was not an all-powerful institution, and McDonough also relates the fascinating and underreported accounts of a cross-section of ordinary and extraordinary people who opposed the Nazi regime and its oppressive governance.

The Gestapo will provide a chilling new doorway into the everyday life of the Third Reich and give powerful testimony from the victims of Nazi terror, while also challenging popular myths about the Gestapo and its inner workings.

I usually leave this period of history to our own War Reporter, Tony Cross, whose marvellous insights and passion for knowledge in these areas are unrivalled in our band of incredible writers, but one of my sons bought me this book with his own hard earned money and this particular son is allergic to books, ask his English teachers if you want proof. The fact he thought about me, remembered I love non-fiction and actually spent his wages meant this book demanded to be read and to be honest I’m really glad he got it for me because it was a fascinating read.

My own studies of history in this period are limited to what we are taught in school, my own adult research is primarily Cold War based and doesn’t dip into 1930’s or Germany under Hitler very often, and so whilst I was aware of the Gestapo (Geheime Staatspolizei) I had no idea how powerful they became so quickly and how much torturous evil they inflicted on their own people. What McDonough has done in this book is lay out how Germany and its politics were structured early on, and then detailed how Hitler with his prominent allies took over Germany and inflicted their rule of law and anti-communist regime onto its citizens. He details well how the likes of Hermann Göring and Rudolf Diels in Prussia and Heinrich Himmler and Reinhard Heydrich in Bavaria operated, merging and taking over existing police forces to bring everyone under their control. McDonough also describes in great detail ‘The Night of the Long Knives’ on June 30th 1934, an event I had no idea about, which saw the emerging Gestapo literally murder any opposition to their reign, including the high profile execution of Ernst Röhm, the leader of the storm troopers. McDonough goes on to show how and who the Gestapo removes to bring about total control of Germany, which included a campaign of terror against religious objectors including Jehovah’s Witnesses and, surprisingly for me, Catholics. I knew about their obvious hatred of Jews but I didn’t have any knowledge about Protestants and Evangelicals being Nazi supporters and Catholics being the main religion of opposition.

What I got from Frank McDonough's book was an in-depth knowledge I never had before, a sickening insight into corruptive power and nation ransacking that, in this modern age, is again seeming all too familiar, and a reaffirmed belief in the often forgotten fact that the first country the Nazis invaded was their own. Some of descriptions in the book take an iron stomach to get through, and be prepared to hug your children come the end because you never knew the world was capable of such evil until you see it written down. The Gestapo: The Myth and Reality of Hitler's Secret Police is a must read for anyone who needs more knowledge of that era of history but also could be held up as a manual to show the effect of what is happening today and that makes it one of greatest books I’ve ever read in my vast non-fiction loving life.