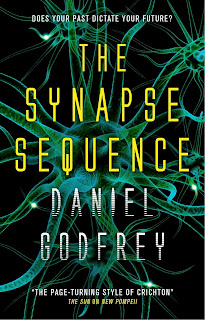 We're honoured to have a guest article today from the author of the newly published sci-fi thriller The Synapse Sequence, Daniel Godfrey, as part of his book tour with Titan Books. Here he talks tech and looks at the future of the crime novel in a technological age...

Phones. Mobile phones in particular. Bastards. That pretty much sums up the attitude of many writers when they started to become prevalent. After all, how can any protagonist be put in danger when they can simply call for help? And wouldn’t a reader ask this question, and get irritated if the convenience of a mobile phone is forgotten by the author?

Of course, writers initially got round this by claiming a lack of signal…or the phones could be stolen or broken… but these solutions soon felt tired. More worryingly, however, is that the mobile phone conundrum is only the tip of the iceberg when it comes to the problems facing the crime genre.

The crime novels I love reading generally revolve around some key tropes, but first and foremost amongst them is the singular detective working the case. Of course, this device is key to good fiction in general – the protagonist MUST be proactive and MUST be driving the narrative. Fiction isn’t really a team game. And yet whilst technological aspects are becoming more important in real-world policing and detection, the main use of computers in crime novels generally get reduced to database technology, with the detective or their assistant entering search terms and making linkages to help solve the case.

Things are already changing. Several police forces have introduced systems which don’t just map crime locations, but actively direct police resources to areas with higher crime rates. Police are now wearing bodycams, many cars have dashboard cams, and we’re all carrying devices that not just take photos but also track our movements. The widespread adoption of his sort of technology will soon cause headaches for writers, villains and our fearless detectives. Some other things which I think will happen, and very soon, include the following:

· Use of AI to examine crime scenes.
· Searching for clues with Augmented Reality.
· Use of AI to conduct interviews.
· Use of algorithms to set jail terms and other punishments, to remove human bias (but replace it with the bias of computer programmers?).
· Surveillance technology that detects suspicious behaviour.
· Surveillance technology that includes facial recognition.
· Life logging, and interaction with home-systems.

It isn’t so difficult to imagine that Detectives could soon be working in a “smart city” like Hangzhou, China, where every citizen’s movements, purchases and interactions on social media are already recorded and analysed – resulting in reported reductions in traffic congestion, and crime. Similar initiatives are also being developed in Dubai, which has integrated CCTV, facial recognition and drone technology to both predict and react to crime.

My new novel, The Synapse Sequence, revolves around the use of two competing technologies to tackle crime: firstly, a method through which the memories of witnesses can be combined into a virtual environment to be explored by an investigator (our hero!). Secondly, the use of mass data sweeps and AI – to both reduce the likelihood of crime occurring and to find those responsible for any residual incidents.

Extracting images from memories may sound like science fiction but, as I was writing The Synapse Sequence, I came across two different science journal articles detailing efforts to achieve this by separate teams of researchers. As such, I don’t think it’s too far away.

The Synapse Sequence is out now from Titan Books