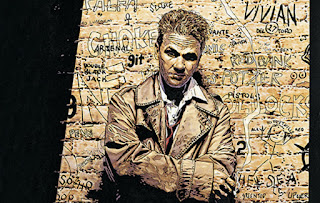 In a special video, worldwide music icon Sting reveals he will pen the foreword to the Constantine, Hellblazer: 30th Anniversary Celebration commemorative collection. Sting’s foreword will take on the perspective of the Golden Boy, Constantine’s alternate-universe twin, touching on his relationship with the occult detective over the years.

In the video, which he took time to film while preparing for his upcoming 44/876 tour with Shaggy, Sting captures the resemblance between himself and the character while wearing the recognizable Constantine trench coat. The musician’s inclusion in the Hellblazer celebration is a nod to the fact that he inspired the antihero’s signature look.


Starting with his first appearance, a debut penned by legendary writer Alan Moore (Watchmen), Constantine has served as an enduring and controversial pop culture character—an exorcist and demonologist, master of the dark arts, and the lead of DC Vertigo’s longest-running and most successful title.

The commemorative collection will explore the complete history of the series with four one-page essays written by Hellblazer author Rich Handley. It will also include a comprehensive timeline of Constantine’s life and three one-page stories featured in John Constantine: Hellblazer issues #1, 2 and 4. Memorable stories from Alan Moore, Neil Gaiman, Garth Ennis, Brian Azzarello, Paul Jenkins, Jamie Delano and others reflect the best of the long-lasting series, including Hellblazer issues #11, 27, 41, 63, 120, 146, 229 and 240 and Saga of the Swamp Thing #37, where the character was officially introduced.