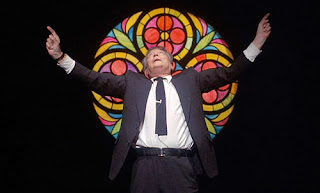 On the big screen again as part of the Edinburgh International Film Festival's Time of the Signs retrospective strand, Steve Taylor-Bryant switches on the television and remembers Network from 1976...

I'm mad as hell and I'm not going to take it anymore!

There is not much a reviewer can add to the legacy of Network after all these years. It won the Oscar for Best Actor for Peter Finch, the first award to be given posthumously, it won Best Actress for Faye Dunaway, the first performance where I realised the difference between a female performance and a strong female performance. Beatrice Straight won an Oscar for Best Supporting Actress, and Paddy Chayefsky took home the Oscar for Best Original Screenplay. Alongside the wins there were also the nominations for Best Picture, Best Director, Best Supporting Actor, another Best Actor nod, this time for William Holden as Max Schumacher, and Film Editing, and Cinematography. It won three Golden Globes and had another nomination, it won one of its eight BAFTA nominations. But most of all it changed the way I watched films. No more did I just sit and watch what was occurring on screen, I became deeply engrossed, I cared what happened to Howard Beale, I hated the way Robert Duvall’s character treated everybody. I was amazed at the performances of an ensemble, individually all great, together unstoppable.

For those of you yet to appreciate what a great film Network was, it is basically the tale of Howard Beale (Peter Finch) who was once the leading news man on American network television. After his wife’s death he became depressed and morose, started to drink a lot, and his ratings plummeted. His friend and boss, Max Schumacher, must tell him he is fired with two weeks’ notice. That night he announces on the news that in one week he is going to kill himself live on air. This leads to anger at the higher management levels, but a keen programmer, Diana Christensen (Faye Dunaway) takes over the nightly news and purposely puts a man with serious mental health issues on the air to rant and wail, a sure-fire rating hit, but good humanity? No, probably not.

It may or may not be a realistic look inside how television works, I don’t know for sure as I don’t work in television, but you only must look at how quickly we make idiots and celebrity hunters famous to realise it probably is. It entertains the viewer but is it good for society? No. Is it good for the people involved? No. Is it ever likely to change? No. I don’t remember a time where controversial practices or irrational people weren’t the very fabric of everything I watched. Where Network should be remembered forty some years later as one of the greatest films of all times, I fear it's more a blueprint for the television we have now. It is an instruction manual for how to ruin lives, all in the chase for advertising dollars, but hypocritically I am sat there watching the film with as much love today as I had when I was ten and first watched it. I don’t know how to fix society, I certainly don’t know how to improve television, but I know that banning or censoring films wouldn’t be the way forward as Network would probably have to be the first to go. Why am I going on like this? Well, that’s because you must take a side when watching Network, you must listen to Beale when he speaks, you must realise that Network shows you that news is propaganda for whoever owns it and we, as a people, suck it all in from the picture box in the corner.

Peter Finch was always a pretty good actor, but in Network he pulled off a performance that is still talked about today, a performance that has bled into popular culture and inspired many actors, performances, and shows, most notably for me the start of Studio 60 on the Sunset Strip where Judd Hirsch’s character Wes Mendell also has an onscreen meltdown that tells viewers to switch off their televisions. Network is everywhere now, its warnings about conglomerates, about politicians, about the corruption of television, about propaganda in the media is vital and these subjects make up most of today's discussions either amongst friends or on social media. The strongest voices in the media are compared to Howard Beale, anyone who wants facts and truth to be their guide is compared to Howard Beale. I’m not sure being compared to a film character from the seventies is something to proud of, but if a forty-year-old film gets us thinking, gets us talking and questioning then maybe, just maybe, Howard Beale would be a little proud of us.