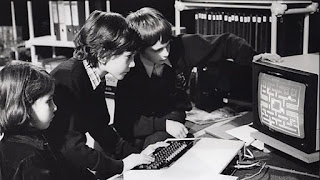 People interested in the history of computing and information technology over the decades can delve into a host of programmes, with the launch of the Computer Literacy Project Archive on BBC Taster...

In the 1980s, the BBC explored the world of computing in a national initiative called The Computer Literacy Project, which ran for nearly a decade, covering the explosion of personal computing and the spread of information technology. The programmes explained principles still relevant today and included interviews with groundbreaking technological innovators of the time including Steve Jobs, Bill Gates, Steve Wozniak (co-founder, Apple Computer), Bob Moog, Roger Foster (Apricot).

Matthew Postgate, BBC Chief Technology and Product Officer, said “Four decades ago the BBC’s Computer Literacy Project helped inspire a generation of coders, many of whom still work in the computer industry today. This archive offers a fascinating and nostalgic glimpse into an important milestone in the history of computing. The hardware may have changed, but the principles still apply - which also makes it a unique resource for teaching and learning that will hopefully encourage a new generation of computer users.”

As an integral part of the project, the corporation also commissioned the BBC Micro, which taught viewers how to program and introduced them to the principles of computing. Professor Steve Furber, principal designer of the BBC Micro and the ARM32-bit RISC microprocessor, and ICL Professor of Computer Engineering in the School of Computer Science at the University of Manchester, said “Computing today is so pervasive and taken for granted that it is important to understand that this was not always the case. The 1980s saw the emergence of the computer from the machine room, where it was under the control of a few folk in white coats, into homes and schools, where it was accessible to all. The BBC Micro played a major role in this transition, and I am still regularly approached by folk who say that the Micro set the direction for the rest of their careers - I guess I can say the same myself! The BBC Micro not only gave folk access to a computer, but it also gave them easy access to its inner working, something that has been lost with most of today’s very sophisticated technology. The Archive reminds us how we got to where we are today, and perhaps what we are missing that the Micro delivered so well!”

Viewers will be able to:


Dr Tilly Blyth, Head of Collections and Principal Curator at The Science Museum, said of the archive, “The history of computing shows us so much more than how far our technology has come in terms of processing speed and memory size. It provides a lens through which we can view humanity - our hopes and fears, our dreams and realities. I’m delighted that this project, to place the BBC’s computer literacy archive online for the scholars and the public alike, has happened. It gives everyone a chance to remember and study that unique moment in Britain when government, broadcasters and companies came together to provide as many people as possible with an opportunity to program a computer. 'Hello World' was a liberating call to embrace the future by understanding, not just using, computers. It is one that is still as significant to us today."

Hermann Hauser, co-founder of Acorn Computers, added “The BBC Computer Literacy project made Britain the most computer literate nation on earth at the time and with the BBC computer created a generation of UK programmers who have become leaders in their field. It inspired a generation of entrepreneurs to get involved in technology companies and made Britain the leading high-tech nation in Europe.”

Visit the Computer Literacy Project at HERE and delve into the the archive.