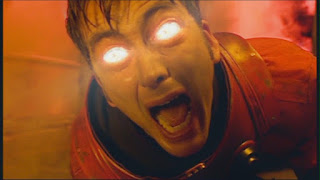 Our Doctor Who expert, Tony Cross, is journeying through all of time and space to bring us his thoughts on every available Doctor Episode. Today is the Tenth Doctor adventure 42...

So first off, I've got The Planet of the Evil on the phone and it would like it's plot back thanks. Yes, it says it is aware that you tweaked a bit here and there but credit where credit is due etc. I then had The Forbidden Planet on the phone pointing out that The Planet of Evil was being a tad hypocritical as it had borrowed stuff too. It's all got rather messy at that point with talk of lawyers, so I stepped away and went back to writing the blog instead.

42 is fun enough. It's certainly rattles along at a fair old pace, building up the tension nicely and it gives Martha (Freema Agyeman) a bit more to do than usual, especially in the 'rest' bits when she gets to call her Mum.*

There's an attempt to get a Doctor Who monster catchphrase up and running by writer Chris Chibnall in 'Burn With Me' but the story around it isn't quite memorable enough to give it oomph. In fact, 42 suffers from being a bit forgettable.

Even now bits of it are detaching themselves from me like icebergs. The constant corridors, the countdown, the dead and the dying. It's all a bit of a blur.

I remember stuff that irritates me. How does the Doctor survive on the outside of the spaceship? I mean I know he's all Time Lord hero but standing outside a spaceship that is THAT close to a Sun. It supposes he could be protected by the shielding, perhaps it is even mentioned but the fact that I can't even remember is a bit indicative.

I won't quibble at the tension it generates. Certainly, the pseudo-real time aspect of the story (in a nod to 24 perhaps) help it that regard, whilst the aforementioned Martha’s Mum moments give us a bit of a breather.

It's just a bit same old same old. A bog-standard Doctor Who plot with better special effects, which I suppose as a fan of the Classic series I shouldn't complain about too much. You could put every Doctor into this story I think, and it would work. Obviously, there would be less emotion. Classic Who companions spent a lot less time worrying about their families. If they even had families, which is why despite my slightly mocking tone on occasion I do think New Doctor Who companions generally have a depth to them that Classic Who ones don't. They have a life before the Doctor and - sometimes - you can believe they'll have a life after the Doctor. Classic Doctor Who companions might have the latter but don't often really feel like they had the former.

There's some solid, if unspectacular, performances from the supporting cast, although I found it hard to believe Michelle Collins was the captain of a space cargo ship (but then I bought the idea of Beryl Reid being one in Earthshock so why worry). She does a good enough job and her death is rather moving. The rest of the cast do a reasonable job but already I'm finding it hard to remember who was who. I can see the actors faces but can barely remember their characters names.

Tennant is very fast talking and confident in this, which makes the Doctor's confession of fear a bit of a show stopper. The Doctor doesn't show fear very often, so we know that he's in trouble. Fortunately getting rid of the of the anti-matt...sorry venting the fuel does the job and the survivors can live happily ever after.

Freema Agyeman is better in this but I'm beginning to find her a less convincing character than Rose. It might be the performance, it might be the writing and it might even be the character brief but I'm just not feeling it. Maybe that will change. Sometimes you must see the whole curve of a character arc before making a judgement.

The story ends with Martha's Mum, a sinister woman** and mention of Harold Saxon. I sense the seeds of a story arc being sown.

*Don't get me started on Universal Roaming. I may start to foam at the mouth.