Doctor Who - The Lazarus Experiment 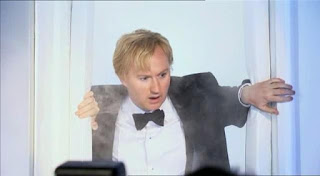 Our Doctor Who expert, Tony Cross, is journeying through all of time and space to bring us his thoughts on every available Doctor Episode. Today is the Tenth Doctor adventure The Lazarus Experiment...

You know it isn't going to end well for Professor Lazarus* (Mark Gatiss) as soon as he says that line about changing what it means to be human. Like many a Doctor Who scientist with the best intention before him Professor Lazarus is biting off more than he can chew.

And it doesn't end well, although it does end with a nice little homage to the ending of The Quatermass Experiment as our poor metamorphosing Professor meets his tragic end in the roof of a London Cathedral. Although it's Southwark this time, not St. Pauls. The main difference being that Victor Carroon and his fellow astronauts are innocent victims of a process whereas Professor Lazarus is experimenting on himself. Even at the end, in a wonderfully played conversation between him and the Doctor the Professor can't let his arrogance go.

The conversation, about immortality, humanity and death, is the highlight of the episode for me. Tennant makes you really feel the Doctor's loneliness and age, whilst Gatiss makes the Professor's motivations clearer. He's not necessarily evil but he is probably a little bit more than misguided.

Other than that this is a fun enough story without setting the world alight. We get to meet Martha's family again. Martha's mother, Francine (who is played rather brilliantly by Adjoa Andoh), doesn't like the Doctor. You suspect that she is the sort of mother that wouldn't approve of most of Martha's boyfriends. A woman of high standards and expectations. Francine is also given some information by a mysterious man on behalf of Harold Saxon about Doctor, which scares her and makes her try and separate Martha from the Doctor. It's never going to work that. Nothing cements a relationship faster than parental disapproval.

This is the most obvious mention of Harold Saxon so far in Series 3 and I suspect we can expect to hear further from him (he types as if totally ignorant of the rest of the season). **

Martha's sister, Tish (Gugu Mbatha-Raw) seems to be a similar sort of woman to Martha. Happily getting involved with the Doctor whilst being chased by a large monster that used to be her boss. I'm not sure I'd deal with that as well as Tish, but that's probably why I wouldn't make a good Doctor Who companion. That and all the running.

Her brother, Leo (Reggie Yates), gets the least to do, except get mildly concussed and providing Martha with a chance to do her (medical) Doctor thing.

Mark Gatiss is rather good as Professor Lazarus. *** His cold dismissal of his wife, Lady Thaw (Thelma Barlow), after his experiment has been a 'success' is one of the nastier moments in Doctor Who being ruthlessly and unpleasantly human.

I've already mentioned David Tennant's rather good in this story, where he gets to be rather old school Doctor-ish. In that sense this is an old school Doctor Who story. Replace the Tenth Doctor with the Third. Swap Martha for Jo Grant and Martha's family for UNIT and you'd have a rather nifty Pertwee story. The Doctor even reverses the polarity - and makes a joke about how rusty he is at doing it as it's been a while - for heaven's sake.

A good effort, entertaining, old school and, with one or two wonderful moments, this isn't bad.

*The other person in this story who you know is going to get a bad end is the 'the only danger in here is choking on an olive' woman. Her sarcastic response to the Doctor is effectively her death sentence. That and her inability to RUN.

**Look it is impossible to forget everything from future episodes. I try not to let it clog up the reviews of individual stories but for me to pretend I haven't seen them would be rather silly. Sometimes I wish I hadn't. Imagine that. Lots of Doctor Who I'd never seen.

***Ah, the subtle choice of name to indicate something about a character. OK, the Professor doesn't come back from the dead, but it is a bit of an obvious fate mark isn't it. If the experiment had been The Lazarus Experiment run by Professor Hastings, then I'd have accepted that. Alright maybe this one complaint is one just for me. [Folds arms in curmudgeonly fashion]